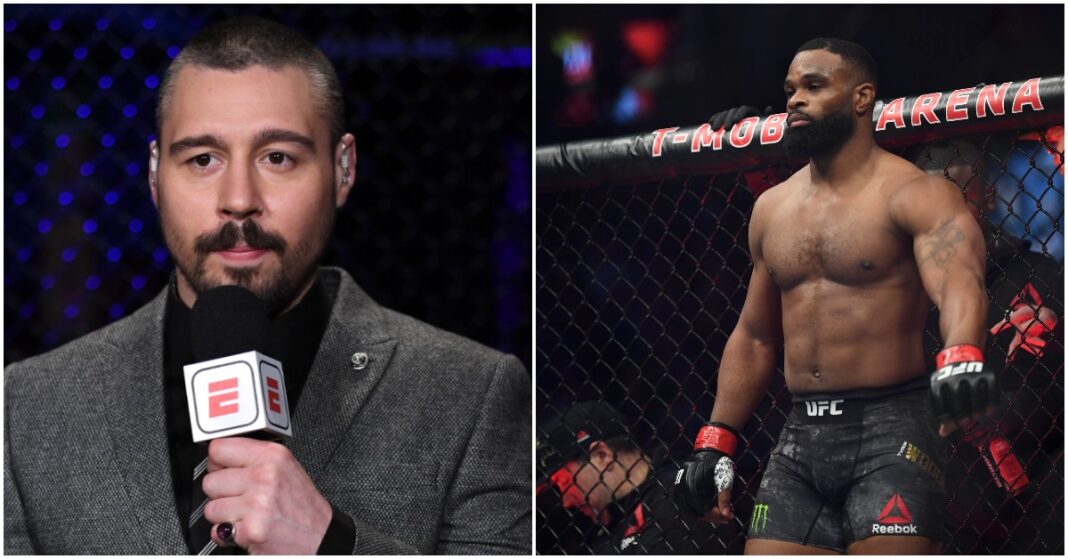 Tyron Woodley has revealed that he wants to take on former UFC commentator and competitor Dan Hardy, but only in an MMA-styled matchup.

‘The Chosen One’ made an appearance on The MMA Hour on Wednesday and responded to comments regarding a potential matchup against Hardy. ‘The Outlaw’ had earlier stated in the year that he had signed a contract to box Tyron Woodley during 2022.

Tyron Woodley didn’t confirm whether this is true or not, but he did have some strong words for Hardy himself.

“I don’t even want to give Dan Hardy the clout”

“I want to say some bullsh*t about him, but I really don’t want to give him the clout. One, who gives a f*ck about a dyed-up mohawk right now. Stop dude, you f*cking 90. Get the dye off, you not ‘The Outlaw’ no more. You ain’t swung at a face in 10 years, so stop with The Outlaw sh*t.

“They were talking to me about him and there was some good money out there. There’s been a lot of good money out there for a lot of different fights, so I’m going to look at it, but I was thinking about the boxing thing with Dan. I think it would be letting him off the hook. If I fought him in MMA it would be a little elbow, a little knee, a little b*tch slap. I need some hands open so I can do some of that. I don’t know, potentially we’ll see.”

You can see the full interview here:

Woodley was on the receiving end of two losses in boxing last year at the hands of Jake Paul but despite this, he now feels other combat athletes are looking to him for the big fight paychecks.

“There was some talking to [Hardy’s team] because a lot of these dudes — and he’s not the only one, a lot of these dudes have piggybacked off of me — what I did in MMA put me in position where I can do certain things in film, music, and other fights in other organizations. I’m the only real free agent out here to be honest. Who else can do whatever the f*ck they want to do, when they want to do it, fight whoever they want to fight, no contract, nobody holding me down, and I’m making a lot of money?”

“So people are gonna hate me. They’re gonna hate on me. They’re gonna see my opportunities, but they haven’t gotten the wisdom yet. My goals and what God has for me and the windows He opened, you will never be able to access it and you can never close my window. So when people look at you and compare themselves, you’re not supposed to compare yourself to another. Don’t look at what I got, look at what you were supposed to get, look at your vision.

I think when guys take their eyes off of their vision and what the f*ck they’re supposed to do and start looking at another man; one, it’s suspect. Two, it’s kind of like you’re taking your mind off of your goal. Don’t look at what I did and want the payday I got. Ain’t none of y’all been no five-time world champions, none of them. So what are y’all talking about?” (transcribed by MMAfighting.com)

Who do you think would win in an MMA matchup between the Tyron Woodley & Dan Hardy?