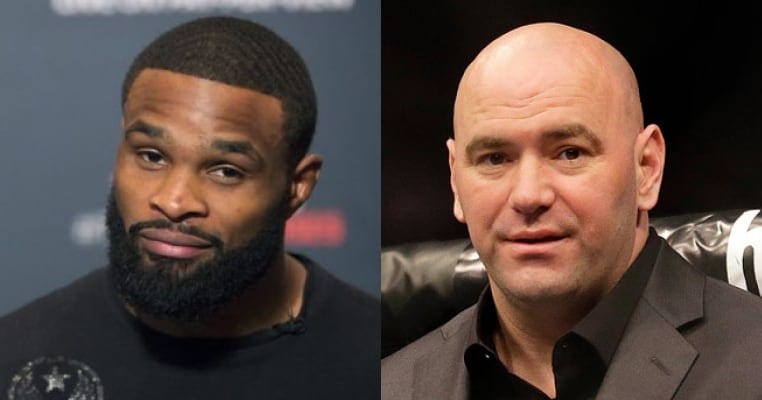 The polarizing titleholder was recently the subject of some heat from UFC President Dana White, who called Woodley out for fighting with his haters on social media because of his oft-discussed accusations of racism in MMA. Woodley has often stated he’s the worst-treated champion in the UFC, and the doubters of those beliefs claim he’s hated simply because he started acting like he was owed super fights with Georges St-Pierre and Nick Diaz minutes after he won the belt from Robbie Lawler last year.

White criticized Woodley on ESPN, praising his good qualities but noting he was a bit dramatic:

Whatever the reason, Woodley isn’t going to back down to those who don’t believe in him. Speaking up on today’s episode of The MMA Hour, Woodley told Ariel Helwani that White had no room to call anyone a drama queen:

“How is Dana White gonna call me a drama queen?” Woodley said. “He’s the biggest drama queen. I learned from the best. I just think that we’ve seen Dana, if you get Dana mad, he gets really mad,” Woodley said. “And then really quickly — I think he’s mad at so many people, I think he forgets he’s mad at you. And he almost just wipes it from his memory. I thought it was actually kind of funny when he called me a drama queen.”

While Woodley wants a ‘money fight’ and is open about it, White’s suggestions that he should be more like Conor McGregor seemed a bit contradictory, as while “The Chosen One” has attempted to hype up three big-name matches, in reality he’s only fought “Wonderboy” since he won the belt. The 34-year-old Duke Roufus fighter will readily he’s not like McGregor and will never be like the outspoken Irishman:

“I didn’t take it personal. I think what he was saying is that he feels as if some of the treatment that I was talking about and some of the buzz, he thinks that if I was more like Conor I would be a bigger star. Well, guess what? I will never be anything like Conor. So if that’s what it takes to be a star, then I will never be a star. You can’t tell a man to be like another man. That’s just not who I am. I just will never be it.”