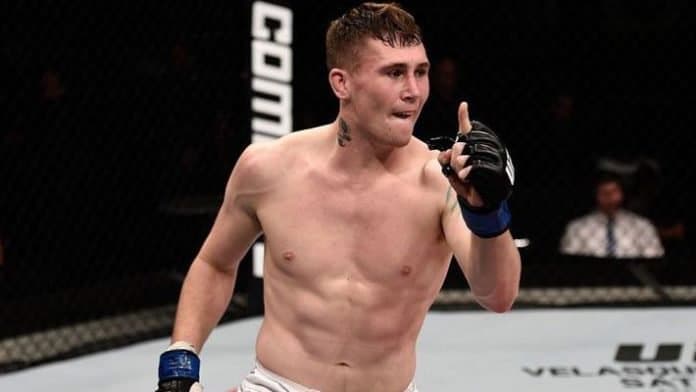 UFC Fight Night 130 went down today (Sunday, May 27, 2018) from the Echo Arena in Liverpool, England. The night was capped by a dynamite welterweight showdown between hometown hero Darren Till and former title challenger Stephen Thompson. The two engaged in a tightly contested striking battle for five rounds. Till was unable to land his vaunted left hand with authority until a brief fifth-round knockdown. Thompson countered effectively and circled out of danger, seeming to win at least three of the five rounds. But the judges gave it to Till unanimously.

The co-headliner saw Neil Magny battle Octagon newcomer and late replacement Craig White. Magny took care of business to maintain his standing in the welterweight division. He pulled White into a knee strike and battered the increasingly defenseless Brit for a first-round TKO.

Kinda hard to not like Wonderboy. Kind, generous human. Pulling for him today. #UFCLiverpool

“Sweet Caroline” is a pretty sweet walkout song, though. #UFCLiverpool

Darren Till pays tribute to Liverpool FC by coming out to “Sweet Caroline.” Crowd loved it, sang along.

What is going on Darren Till? You promised us the Phil Collins and the drums? How are we supposed to know you're the mother f'n man?

Darren Till belting "Sweet Caroline" with the crowd in Liverpool was… wow. Unforgettable. That's now burned into my eye sockets.

Thompson doing a good job so far staying off the fence, which is absolutely crucial to him in this fight. #UFCLiverpool

We peaked at the walk-out. It's all downhill from here.

At some point, a fight might break out here. #UFCLiverpool

Till looks hugeee compared to Wonderboy in there. I feel like this fight could end at any moment… #UFCLiverpool

Not the banger you wanted. But the high level chess match that you very much appreciate. Great fight to both men! @WonderboyMMA @darrentill2 @ufc

Honestly feel like Hardy was watching a different fight, besides that one punch in the fifth Till didn’t do anything at all. Wonderboy should win this, hopefully the judges don’t rob him.

After two straight WW main events, it’s clear why the UFC booked an interim title fight for #UFC225.
Neither Till, nor Usman did enough to distinguish themselves as the #1 contender.
Even if Covington vs. dos Anjos is a dude, one of them will have to fight Woodley.#UFCLiverpool

Wonderboy flew to a 25-year-old's backyard who was ranked lower than him, watched him miss weight, beat him (IMO), watched the decision go (unanimously) against him, and managed to smile as it happened. Man.

I thought Thompson won, but it was really just up in the air.

Beautiful job by the judges. #AndNew

why would anyone agree to fight Till in Liverpool ever again?

How a professional #MMA judge who gets paid to do his work won‘t give Wonderboy either round one or four is beyond me. #UFCLiverpool https://t.co/0jLnijZLul

Judges are going to judge.

Craig White might just become one of my guys on the basis of his nickname. ThunderCats was by far my favourite cartoon to watch as a kid. #UFCLiverpool pic.twitter.com/v5fBhfQ2Kx

IT'S NEIL MAGNY TIME WHERE ALL MY MAGNY-HEADS AT?

Neil Magny seems like a genuinely good dude, and that was before I read he was donating $15k to cover that little girl's medical expenses. War Magny.

When you're ranked and you get a late-switch opponent making his UFC debut, that's pretty much what you have to do just to stay status quo.

Walk in the park for Neil Magny. His 19th fight in the UFC ends with a R1 TKO over Craig White.