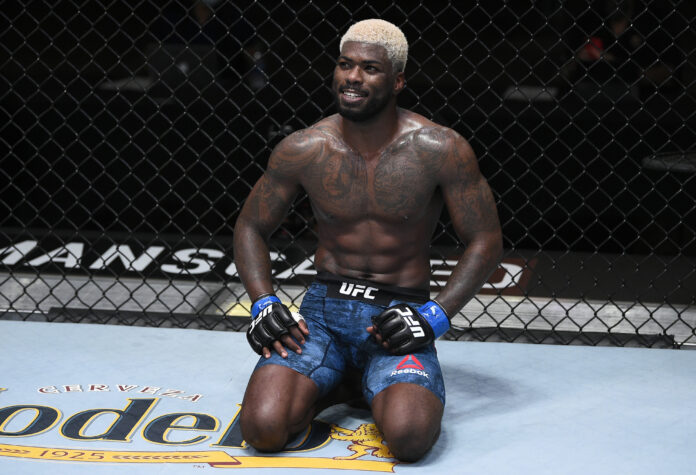 Trevin Jones is set to take on Raoni Barcelos at UFC Vegas 61, where he promises an all-time performance, stating: “I’m expecting myself to perform a lot better than any fight of my life”

Trevin Jones made his UFC debut in 2020, on just 2 days’ notice when he took on the extremely dangerous Timur Valiev. He would score a massive upset TKO win, which would be later overturned. However, Jones followed that up with another TKO win the next year, but since then, he’s been on a 2 fight-losing streak. This has led ‘5 Star’ Jones to explore more training options, as he told Lowkick MMA’s Alex Behunin in an exclusive interview.

“I went to Korea for a little bit. I got a lot of work there. I went to Thailand, I spent almost a month there. That’s where I actually did my camp.”

Prior to taking on Javid Basharat, Jones was riddled with injuries, which was the reason why he couldn’t meet Barcelos for their previous date.

“I had a little leg injury, knee injury, ankle injury. It was my ankle at first, but after it healed, it turned into my knee. I was actually supposed to fight Raoni before fighting Javid. That’s why I couldn’t fight Raoni because my knee was messed up.”

Despite the uphill battle, Trevin Jones nearly pulled off the win against Basharat, only for the judges to give it to Javid. Jones saw that as a learning lesson, as he promises to be more aggressive in his fight against Barcelos.

“Biggest thing I took away from the Javid fight was move forward a little bit more.”

When it comes to facing Barcelos, Trevin Jones is confident that he’ll be able to flip Barcelos’ biggest advantage against him, and catch him with some precise and powerful counter shots.

“It’s a good matchup. He’s mostly boxing-heavy. I know he has wrestling, I know he has a jiu jitsu black belt, but he’s a striker. He puts pressure on the guys and try to break them with pressure and the hands, but at the same time, he’s very vulnerable for my counters and my power.”

The fight goes down this weekend on a card headlined by Mackenzie Dern and Yan Xiaonan. However, Jones and Barcelos have a really good shot at stealing the spotlight with a big performance or a fight of the night type match, as both look to get back to their winning ways.