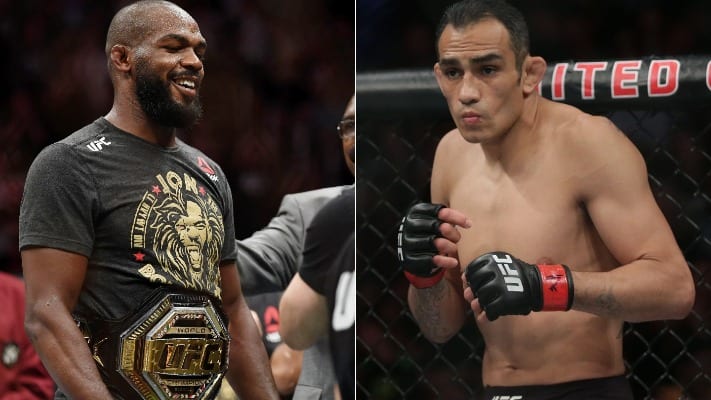 In the meantime, he has taken to Twitter to call out “Bones,” referencing their old college wrestling days.

“Lot Of Shit Talk @JonnyBones You Wanna Play Again Like We Did In College? I Bumped Up Two Weight Classes & I’ll Do It Again ???? Growth. You Wanna Play Chess I’ll Be Your Huckleberry. Got You In 2 Neanderthal, Talked To Your Pops He Knows Who’s Champ. # Anklepick # DavidVSGoliath”

Jones is one of the most – if not the most – dominant champions mixed martial arts (MMA) has ever seen. He has never been legitimately beat inside the cage, and comes off a split decision victory over Thiago Santos to retain his 205-pound title earlier this summer. It’s believed Dominick Reyes will be the next man up to challenge “Bones” for the light heavyweight title. However, Jones also has the option to jump up to heavyweight and make his debut at the weight class.

As for Ferguson, he is on a ridiculous 12-fight win streak in, arguably, the UFC’s toughest and most talented division. He’s expected to be the next challenger for Khabib Nurmagomedov’s lightweight title. It’s rumored the pair could be booked to finally square off in Russia come early 2020.

What do you think about Ferguson calling out Jones?