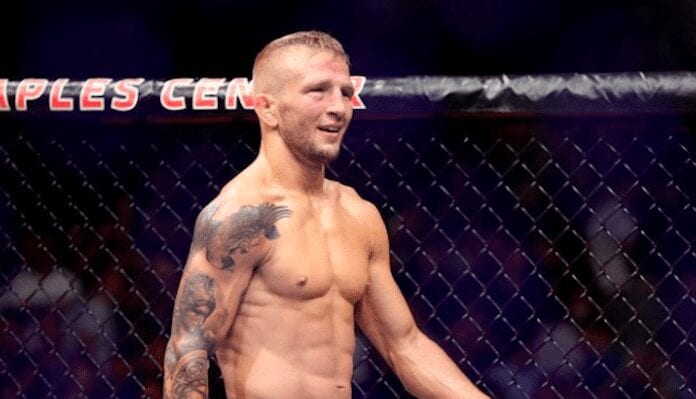 Former UFC bantamweight champion TJ Dillashaw is drawing near to his return from a two-year suspension, and a teammate’s photo shows him to be in tremendous shape.

Dillashaw was last seen in the octagon in January 2019, when he lost by first-round knockout to flyweight champion Henry Cejudo. Things only got worse for him after the fight, as he later tested positive for performance-enhancing drugs. He was handed a two-year suspension from the UFC’s drug regulating body, USADA. He has largely stayed out of the public eye since then.

Dillashaw has since reappeared in a photo posted by his training partner, Bellator contender Juan Archuleta. In a post on his Twitter account, Archuleta mentioned a training session between Cub Swanson, Dillashaw and himself. He also included a picture of them together.

It appears that Dillashaw, who was known for his great conditioning during his run, has not missed a beat. That being said, when he does return, it will be a to division that shares little resemblance to the one he left. Firstly, Cejudo – the man who beat him for the title – has since retired. Secondly, a whole new crop of young fighters have worked their way to the upper echelon of the division, including current bantamweight champion Petr Yan.

Perhaps most importantly, fans and fighters alike are left to wonder what version of Dillashaw will show up upon his return. He will turn 35 in February, a month after his suspension is lifted. As a fighter known for his cardio and relentless pace, Dillashaw will have to fight against Father Time as well as a whole new crop of opponents to prove that his success wasn’t entirely due to his drug use. Whenever he does return, he will have no shortage of fighters ready to see what the ex-champ has left.

Who do you think TJ Dillashaw should face in his return bout? Let us know!