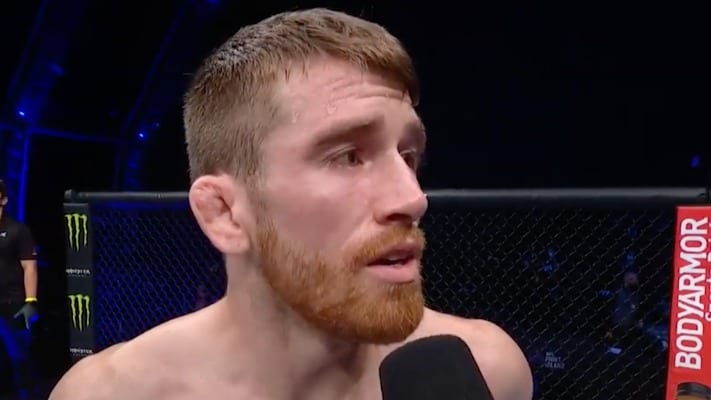 There are only two fighters who make sense to be Cory Sandhagen’s next opponent.

Sandhagen returned to the win column with an emphatic second-round TKO win over Marlon Moraes in the UFC Fight Island 5 headliner on Saturday night.

It put Sandhagen right back into the title mix as he bounced back from what he labeled to be an “embarrassing” first-round submission loss to Aljamain Sterling in June. That victory for Sterling all but assured him of the next shot at the bantamweight title and although it’s yet to be official, it’s highly-expected that the next championship fight will see him face current champion Petr Yan.

If that is the case, Sandhagen only envisions two fighters for him to face next.

“The only other guys who have an argument is TJ when he gets back in January and Frankie [Edgar],” Sandhagen said in his post-fight interview with Dan Hardy. “All the respect to both of those guys but I want that belt. Those are the only two guys ahead of me and then I want the winner of Yan vs. Sterling.”

Dillashaw, of course, is serving a two-year ban from USADA after testing positive for EPO in 2019. He will be eligible to compete in January and a fight with Sandhagen would certainly be an intriguing affair.

For now, we’ll have to wait and see what the UFC’s plans are.

Who do you want to see Sandhagen face next?