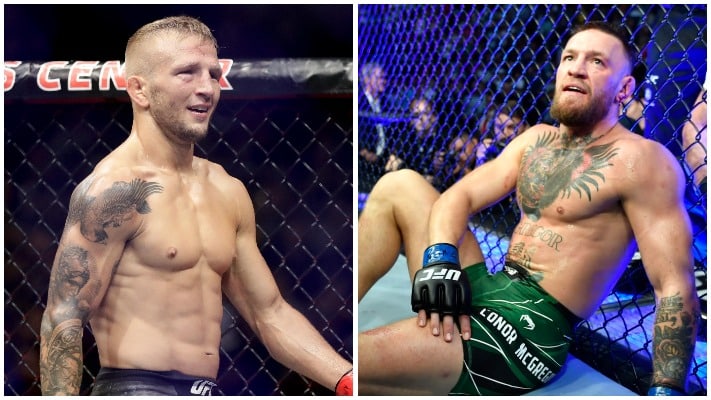 TJ Dillashaw wants to support Conor McGregor during his lowest moment in MMA but is struggling to do so because the Irishman has consistently made excuses for losing at UFC 264.

McGregor started well in his trilogy bout with Dustin Poirier on July 10.

‘The Diamond’ took over midway through round one and put on a dominant display on the mat.

As the round came to a close, McGregor popped back to hit feet and exchanged shot with his rival. Both men missed but ‘Notorious’ fell to the floor with an apparent leg injury. The former dual-weight champion survived the round but the fight was waved off by the ringside doctor.

One glance at the slow-motion replay is all you need to figure out that McGregor suffered a horrific injury to his leg at UFC 264. It was later confirmed that he broke his fibula and tibia.

Despite falling short at UFC 264, McGregor has not let up with his trash talk and has been angling for a fourth fight with Poirier.

‘Mystic Mac’ has also publicly claimed he entered the Octagon with stress fractures to his leg on July 10. Although many people including two medical experts struggle to believe this was the case.

During a recent appearance on Food Truck Diaries, Dillashaw commented on McGregor’s antics since losing at UFC 264.

“I don’t know, man. He’s (Conor McGregor) digging himself into a hole right now,” Dillashaw said. “He keeps putting these videos out, making excuses, make himself look like an idiot. I want to back the guy now because he’s at his lowest low. I didn’t want to back him when he’s at the top. I want to back him now because he’s at the lowest low and what he has done for the sport. But he’s making it tough. He’s looking such an assh*le.” (Transcribed by Sportskeeda)

Do you agree with TJ Dillashaw? Is Conor McGregor looking like an assh*le due to his UFC 264 post-fight antics?