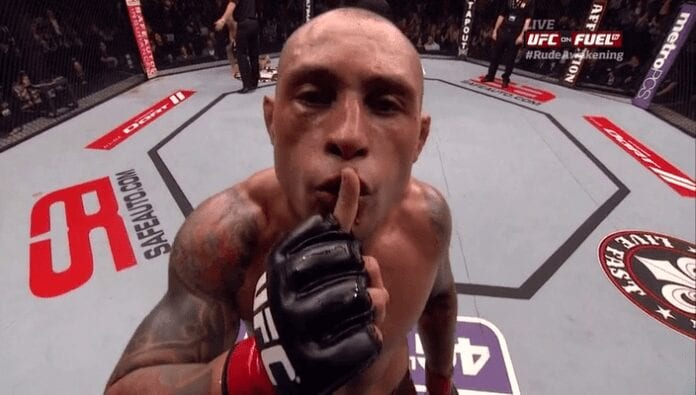 UFC veteran and oft controversial figure Thiago Silva had a very mishap-filled 2014. First he was famously arrested for alleged attempt murder and felony weapon charges, and then he was acquitted when the key witness in the case left the country. This was not the end of Silva’s troubles by a long way though.

After being reinstated by the UFC, a disturbing video of Thiago Silva threatening his wife with a loaded pistol emerged, and he was once again canned by Zuffa and Co. Now we learn that Silva has signed to WSOF (World Series Of Fighting) and will debut on March 28th in a four-man tournament, vs fellow UFC cast off Ronny Markes. As per MMAFighting.com, WSOF exec Ali Abdel-Aziz:

“I’ve talked to a lot of guys in his camp. Everyone talks about his character. I’m lucky enough to know a little more about the situation with his ex-wife, and I feel comfortable with this. If the judge didn’t convict him, why should we convict him? He’s of the top light heavyweights in the world. We can give him an opportunity and a platform to showcase his skills.”

The light-heavyweight WSOF title awaits the winner of the four man tournament on NBC Sports, as he rubs shoulders with former UFC stand out and opponent Matt “The Hammer” Hamill. Silva beat Hamill by decision at his last showing for the UFC, that was way back in late 2013. Perhaps Silva will look to take the route of Anthony Johnson, and prove his maturity outside the UFC banner.

Other faux-pas’ during Thiago Silva’s UFC stint include submitting a false urine sample the NSAC (Nevada State Athletic Commission), failing a dope test for marijuana, and missing the light-heavyweight limit by three pounds in his last UFC fight.

In comparison to “Rumble”, there is likely far too much damage done for Thiago Silva to hope for a return to UFC action, but he will probably be a can-crushing force to reckon with over at WSOF….