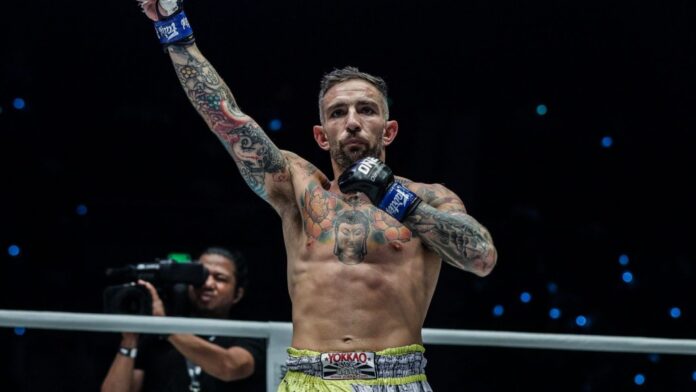 The art of eight limbs has been growing in popularity across the British Isles since the late 1970s, and as a result, some world-class athletes have emerged.

These nak muays have become fan-favorites at home and abroad, and have the skills to take on the toughest competitors on the planet. What also sets them apart from the rest of the pack is their collections of championship belts.

These are five of the best and most influential Muay Thai athletes ever to emerge from the UK.

Ask anyone to name a Muay Thai fighter from the UK, and the first name that will probably spring to mind is Liam “The Hitman” Harrison.

The Yorkshireman is widely regarded as the best and most exciting nak muay ever to emerge from his homeland.

His fighting style is an all-out attack. His highlight reel is littered with thudding leg kicks, power punching, and some of the most spectacular sweeps and dumps you’ll ever see.

Plus, Harrison is a KO artist. It is not as common to see a stoppage in a Muay Thai match compared to boxing or MMA, and few of “The Hitman’s” contemporaries can match his 40% knockout rate.

But Harrison would not be regarded so highly without a record of winning major honors, and his collection of belts eclipses almost everyone else.

He beat Dzhabar Askerov for the Patong Stadium belt, knocked out Numphon PK Sterio for the WMC World Title, and defeated Mehdi Zatout for the WBC Muay Thai World Championship – to name but a few of his greatest triumphs.

A mark of Harrison’s skill is how well-respected he is in Thailand. Fighting out of Jitti Gym, he lived there for two years, competed in the most prestigious stadiums, and faced some of the greatest Thai fighters of his generation.

Those exploits helped him to win Muay Siam magazine’s award for best foreign fighter of 2007.

His biggest win is arguably his defeat of Anuwat Kaewsamrit. “The Iron Hands of Siam” stopped the Englishman in their first bout, but Harrison came back, stronger, faster, and smarter to even the score the following year.

Even in defeat, “The Hitman” has enhanced his reputation. Saenchai – arguably the best Muay Thai fighter of them all – described him as the toughest foreign opponent in his long and decorated career.

The UK is one of the hotbeds for women’s Muay Thai.

While the sport’s homeland took its time embracing female fighters, England produced hall-of-famers like Julie Kitchen and Ruth Ashdown in the past few decades.

This generation’s leading lady is on track to eclipse even their accomplishments. Iman “Pretty Killer” Barlow is considered to be one of the best pound-for-pound fighters in the world,

She is also closing in on 100 career wins and has collected more belts than most martial artists would ever dream of.

Barlow started learning to fight when she was a toddler and won her first title in Thailand when she was a teenager. She went on to win Lion Fight, WBC, WPMF, and MTGP belts, as well as a record-breaking collection of kickboxing championships.

Few opponents can handle her aggression in the ring, and she is deadly at every range.

If her rivals are not being hammered with round kicks and lanced by teeps, their heads are being rocked back by punches, or they’re crumbling under the force of her relentless elbows and knees.

When Ronnie Green started training under “Master Toddy” Thohsaphol Sitiwatjana in 1978, few Brits had even heard of Muay Thai.

The “Machine Gun” had to settle for representing the art of eight limbs in UK full-contact karate competition at first.

When he finally got the chance to spread his wings and compete in the sport he trained for, he built a resumé that solidified him as a pioneering icon.

He was the first British fighter to compete and win in Thailand, and the first to become a Muay Thai World Champion.

Green was competitive with many of the Thai greats of the era including Sagat Petchyindee and Sombat Sor. Thanikul, thanks to a hybrid style that combined traditional Thai techniques with fast and powerful punching combinations.

He became so successful that top Thai names came to Europe to fight him. His fight with Sombat was broadcast from London, live on Thai TV.

Mark Wakeling was a British Muay Thai trailblazer who competed in the famous King’s Cup in Thailand, but his son and protegé Steve eclipsed his old man by winning some of the sport’s biggest titles.

Just listing some of his crowning achievements would be enough to show what an incredible fighter “The Surgeon” was, and why he was one of the first athletes to be inducted into the WBC Muay Thai Hall of Fame in 2020.

Then, in 2011, following a two-year hiatus, he returned to the ring to face Jaowchalam Chatkranokgym in Thailand, and beat him to claim the WBC Super-Middleweight World Champion.

Plus, “The Surgeon” was never in a dull fight when he stepped over the ropes. He kicked like a mule, swarmed on opponents with powerful punches, and was lethal with elbows.

The Bad Company gym in Leeds has produced some of Britain’s best, including Liam Harrison and his cousin, multiple-time World Champion Andy Howson.

It is also home to ISKA Muay Thai World Champion Jordan Watson. In terms of raw talent, few of his countrymen can match him.

He earned the nickname “Quadzilla” for his impressive thigh muscles, so it’s no surprise he’s best known for his supreme kicking ability. His head-kick KO of multiple-time Lumpinee Stadium champion Pongsiri P.K.Saenchaimuaythaigym proved just how dangerous he can be.

Watson may not be as decorated as his teammates, but a closer look at the caliber of fighters he has beaten proves just how good he is.

Combat aficionados would argue that a fighter’s greatness is not just about the shiny belts you collect, but who you face in the ring.

When you view Watson’s biggest wins alongside the way he fought against the likes of Buakaw, Yodsanklai, and Sitthichai, it’s easy to see why he’s so highly regarded.