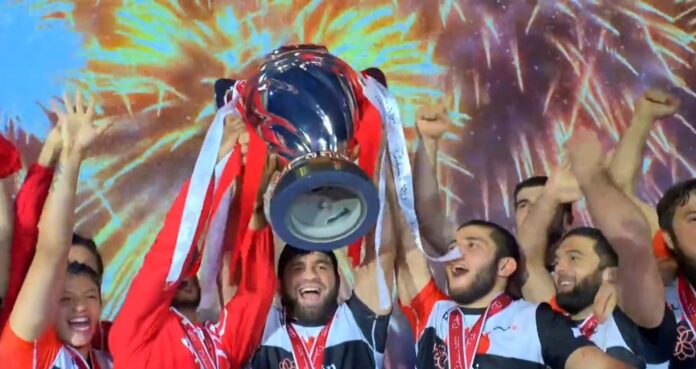 The Kingdom of Bahrain has emerged as the inaugural MMA Super Cup winner on Sat night (March 12) after sweeping Ireland to capture the trophy and collect $USD100,000 for their efforts. The win, was made all the sweeter because it took place on home soil inside the Khalifa Sports City, Bahrain. It was a fitting to end to BRAVE International Combat Week, and hopefully the start of something big for amateur MMA.

The Irish team started the match-up already having to play catchup with two of their fighters failing to receive medical clearances after their semi-final bouts. This meant Bahrain entered the series already 2-0 up before Sabrina Laurentina De Sousa, the world female featherweight champion, put the hometown side out to a 3-0 lead with her first-round submission win over Kerry Ann Vernon.

From there on out, it was all one-way traffic as the Bahrain team gained momentum and went undefeated to claim a 9-0 series win. It was a disappointing end for the Irish team, but the Irish fighters will take comfort knowing they made it to the final and won $75,000 in prize money. The Irish team will no doubt continue to grow and improve the future and the team have an exciting future ahead.

Team Bahrain is loaded with talent, and it will only be a matter of time before its fighters start making waves on the professional scene. De Sousa and Ramazan Gitinov, in particular, are names that MMA fans should be paying close attention to.

Kazakhstan bounced back from its loss to Bahrain in the semi-final to win the bronze medal match with a flawless victory over Mexico. Team Kazakhstan will take home $50,000 for their efforts.