LowKickMMA.com
Home UFC News Tai Tuivasa Does Shoey On Top Of The Octagon From SteveWillDoIt’s Shoe... 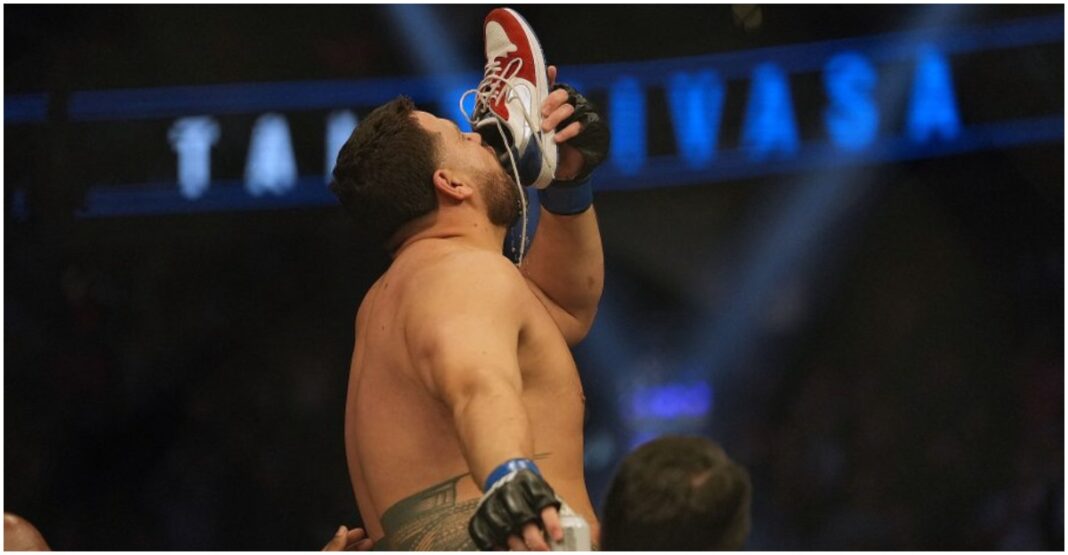 Fan favourite Tai Tuivasa pulled off his most significant win to date after knocking hometown hero Derrick Lewis out cold in the UFC 271 co-main event.

After facing an early scare with a wild onslaught from Derrick Lewis, the Aussie stayed composed and stuck to his motto of “swanging and banging”, eventually landing a nasty elbow that left Lewis out-cold and face planting the canvas.

Tuivasa’s famous post-fight celebrations of drinking a beer from anybody’s shoe has grown his fan base tremendously and has brought his own Stone Cold Steve Austin type feel to the UFC. It has been publicized as of late Tuivasa’s growing relationship with the Nelk Boys, and that relationship got even closer after Tuivasa did a shoey from popular YouTuber SteveWillDoIt from the Nelk Boys’s own shoe while sitting on the top of the Octagon.

Moments after Tai Tuivasa left the Octagon to a roar of cheers from the fans. It didn’t take the twenty-eight-year-old to mingle with the fans for more beer drinking.

Tai Tuivasa Does Shoey With Fan

In 2018/19, Tai Tuivasa was in danger of being cut from the organization after dropping three back-to-back fights to Dos Santos, Blagoy Ivanov, and Sergey Spivac. Since then, he has accumulated five straight victories, all by stoppage and completely changed his career trajectory. Derrick Lewis is the biggest scalp thus far.

Tai Tuivasa entered the bout at number eleven in the rankings, while Derrick was number three. So we can fully expect Tuivasa to leap into the top ten, which would open some exciting doors and matchups.

On the other hand, UFC 271 saw Derrick Lewis suffer another tough loss in his home city of Houston, TX, and it’s safe to say ‘The Black Beast’ won’t be in a hurry to fight in front of his own people.

With Tai Tuivasa securing his biggest win yet with the promotion, who would you like to see him matched up against next?