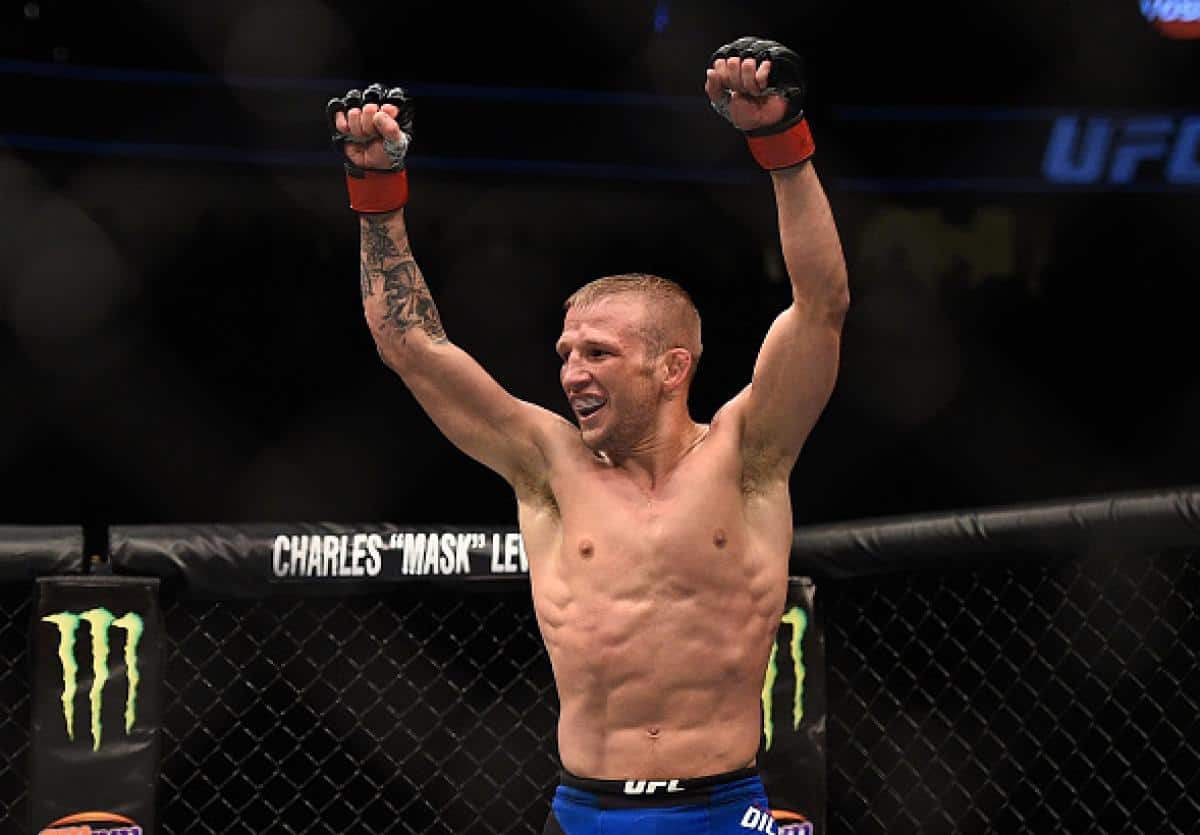 UFC flyweight champion Demetrious Johnson created a stir within the MMA community when he released a lengthy statement about his mistreatment by the UFC and their attempts to bully him into a fight with former bantamweight champion T.J. Dillashaw. He also noted that that UFC President Dana White threatened to shut down the entire flyweight division if Johnson did not give into their demands to fight Dillashaw.

Dillashaw, who poked fun at Johnson on Instagram, spoke with Brett Okamoto of ESPN to talk about the situation as well as why he thinks Johnson is refusing to fight him.

“I understand where he’s coming from with some of it, but a lot of it was a slap in the face to me as well,” said Dillashaw. “Trying to say that I don’t really deserve a title shot which I think is complete bullcrap. I don’t think there’s anybody in his weight class right now to push him and I’m healthy, I’m in shape, I’m already in the process – because Dana told me that’s who I’m fighting – of dropping the weight class. I’m waking up at 143 pounds in the morning, so that’s a very, very reachable goal. So for him to go and discredit my name and the things that I’ve accomplished just to not be worthy of a title shot kind of pissed me off a little bit. And it’s kind of embarrassing to have him go and call himself the GOAT, to be the greatest of all time and turning down fights because he’s scared to fight. He can say whatever he wants to say about all his other issues he has and being bullied – which, I don’t understand how the greatest of all time gets bullied – but it all comes down to him being scared of me beating him. He knows that I’m a bad matchup for him and that it’s a fight that he does not want.”

Dillashaw was scheduled to fight current bantamweight champion Cody Garbrandt on July 8 at UFC 213, but Garbrandt was forced to withdraw from the bout after sustaining a back injury. As a result, Dillashaw began campaigning for a flyweight title shot despite having never competed in the division. There has been some concern about this potential fight in the fact that it puts Johnson in danger if Dillashaw misses weight. Dillashaw considers this to be excuse making as he believes he could make the weight.

“I’m gonna make it. I have the utmost confidence. I know that I’m gonna make it. I’ve never missed weight once in my entire life or my career going from wrestling from eight years old through all my professional career. If I agree to do something, I’m doing it. I’m a very dedicated athlete, and like I said, I’m already waking up at 143 pounds. That’s not big of a weight cut at all. I think it’s just an easy excuse. 100 percent. Put that [stipulation] in there. I’m not gonna miss the weight. That’s not something I have to be worried about at all. I’ve already got it down to a perfect science of what I’m gonna be doing. So yeah, go ahead and put it in the contract because I’m not gonna miss weight.”

Johnson’s name has been included in the conversations about who is the greatest fighter of all time. According to Dillashaw, he sees this whole situation as a condemnation of all that praise.

“Don’t be scared. To me it’s like, you’re being a ***** about it. Tell the truth. You’re talking about how you don’t want to fight me for all these other reasons, but really you don’t want to fight me because you’re scared. Guess what man, you’re the greatest of all time. Put it out there. This is gonna be a historical event for you to try to break your record, let’s make this the real deal. Let’s make it against an opponent that’s gonna sell some pay-per-views, that’s gonna be a big draw. It’s just frustrating to see him backpedaling from this, and it’s embarrassing for the sport for the greatest of all time to be avoiding the fight the way he is.”

Johnson also aired grievances on a host of issues including the company’s failure to promote him and low pay. Dillashaw can be sympathetic to those issues. However, he thinks a fight with him could solve most of Johnson’s problems.

“I feel like him fighting me will be able to fix a lot of his problems. He will get a pay-per-view cut. He’s actually gonna make the paychecks he’s earned. He is pound-for-pound best fighter in the world right now, and I think this is the fight to get him paid. If he doesn’t step up, I think a lot of people are gonna have to put an asterisk next to his record of beating Anderson Silva’s streak as well as being called the greatest of all time. I really think it’s kind of a chickens**t move to bail out of this fight.”