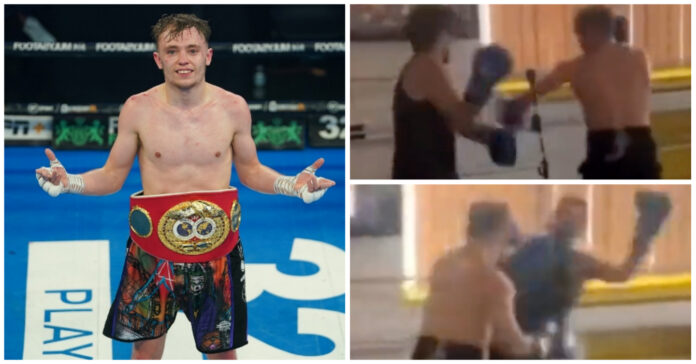 Sunny Edwards thrashed an online troll who traveled 200 miles to his Sheffield gym.

IBF flyweight titleholder Edwards had recently been trading verbal jabs with Fab Tanga, the amateur ‘Twitter troll’ who paid £110 ($132) to travel over 200 miles by train from London to test out his boxing chops against the world champion. Prior to the actual fight, he spent a day hyping up his clash with Edwards on social media.

Having a dispute with a boxing champion is not a good idea. Tanga found this out firsthand when he was forced to retire in the second round from exhaustion after Edwards beat him up on the ropes.

You can watch the full video originally uploaded by Sunny Edwards below.

Edwards, who comes from an established boxing family, can be seen toying around with the troll. He has his hands down and gives his opponent every opportunity to strike before eventually turning it up a notch and quite literally knocking some sense into Tanga.

A Twitter account with the same name as the troll Fab Tanga has been sharing the videos claiming to be the proud participant in them. His whole plan seems to be geared towards getting a reaction out of people, something he expresses in his account bio, “Provocation,wildness and expressionism are art. I am art. visionary business producer.”

Besides that, the self-proclaimed provocateur artist could also use a new career: “God save the Queen and Give me a Well pay Job,” he requests in the bio.

Tanga was also asking for money from Michael Benson, the person who uploaded the viral clip on Twitter.

He followed up with a photo reflecting a negative bank balance insisting that he didn’t want anything. It also looks like things are fine between Tanga and Edwards now, with the two exchanging pleasantries after the clash.

“Be there and try to hit the fastest man in the world , thank you Sunny Edwards I know you was able to hurt me more,but the god give me the strength at least to stand infront of a REAL CHAMPION, in and out of the sport, you are an EXAMPLE FOR ALL THE WORLD Sunny Edwards he is FAST.”

“660k views on that video .. @TheBoxingKing1 you see , there are people very fast out there :))) God bless you all, I have headaches today ahhahaha :)”