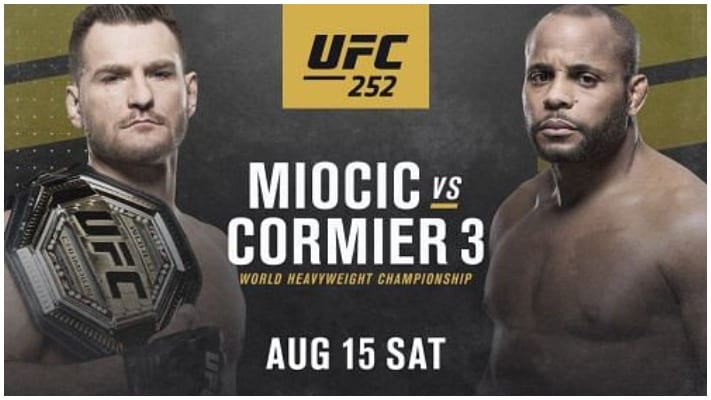 In the UFC 252 main event, we have one of the biggest heavyweight fights ever as Stipe Miocic faces off against Daniel Cormier for the third and final time. Check out who the LowKickMMA staff think will win this rubber match below…

Jordan Ellis: I’m backing Daniel Cormier going into this one. ‘DC’ has dominated the vast majority of this rivalry so far. I do believe he got overconfident in the last fight and paid the ultimate price. I don’t think he will make the same mistake twice. Cormier will mix in his boxing and wrestling to get this done down the stretch. He could stop Miocic in the middle rounds or drag it out to a decision. Either way I see Cormier getting his hand raised before sailing off into the sunset.

Abhinav Kini: I feel Daniel Cormier will go out on a high. The body shot problem will still be there which Stipe Miocic can exploit but given this is his last fight, I think Cormier will be better prepared for it. Along with him planning to use his wrestling more and this being in the smaller Apex Octagon, I can see “DC” getting the decision.

Ryan Maccarthy: This is really a -110/-110 pick ’em fight. There are so many different factors. Stipe Miocic took Francis Ngannou down pretty much at will. Ngannou is a massive human being. Stipe doesn’t get tired, he wont. He’s going to be ready and in shape. It’s about who can impose their will on the other. Cormier will try to wrestle and might have success with it, but i dont believe he will be able to have his way with Miocic like some. If this goes into championship rounds, I think Stipe keeps this standing I truly believe Stipe Miocic takes this and becomes the greatest heavyweight of all time. Two great champions facing off one final time. Everyone wins here, the fans win. It’s a huge fight. I can see the argument for both for sure. Miocic by TKO in the 4th Round.

Harry O’Connor: I’m honestly so torn on this one, I keep changing my mind but as of right now I think that DC will do it. DC knows how important this fight is for both men and despite him saying he wants to ‘fight’ at the press conference I can see him really trying to utilise his wrestling this fight to wear Stipe out. I think DC will take this one on points.