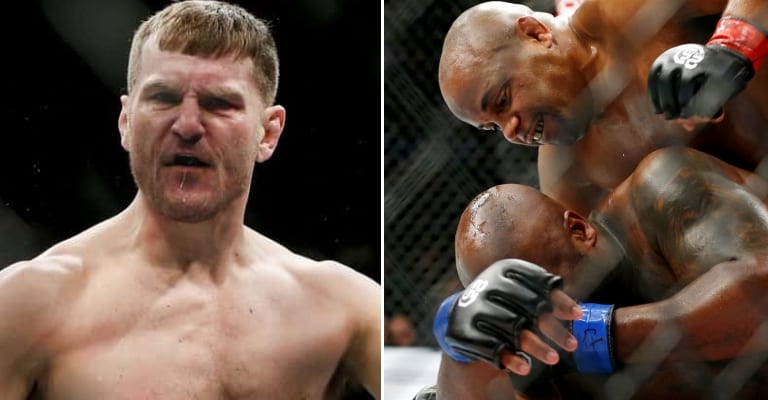 Daniel Cormier became the first double champ to defend both titles last Saturday (Nov. 3, 2018) night at UFC 230 when he defeated Derrick Lewis in the main event.

Although “DC” effortlessly imposed his will over the larger challenger, not everyone was impressed. The longest-reigning heavyweight champion, Stipe Miocic, believes Cormier took the easy way out by fighting Lewis instead of him.

“Yeah, I saw the fight. I saw ‘DC’ beat a guy with a bunch of Instagram followers, with one hand,” Miocic said on the Ariel Helwani MMA Show.

“I offered myself to fight ‘DC’ on that card and he said no. They told me that he wasn’t available and literally a week later, he is fighting Lewis. It was annoying (watching the fight), it should be me,” he added. “There’s a ton of guys who never defend the belt and they get title shot rematches. I defended it three times, did it as a favor for a super fight and I don’t get a rematch?”

Cormier knocked Moicic out in the first round of their heavyweight super fight at UFC 226 to claim the title. Since then, Miocic has been trying to invoke his rematch clause but Cormier doesn’t seem too interested. “DC” admits fighting Miocic on short notice is much more challenging than Lewis.

Whatever the case, Moicic wants his belt back and to do so he needs to fight the champion.

“I mean, it’s not like he was beating me the whole fight. I was winning that fight and he caught me with a shot,” he added. “It’s not good enough. You think I was in great shape? 100-percent (he would’ve fought.) I want my belt back, that is my belt.”

If Cormier does indeed retire March of 2019, it may be difficult for Miocic to get his rematch. Cormier would figure to have one fight left in that time frame and he is looking at big-time money fights. Unfortunately, Miocic isn’t a money fight.

“I’ll just keep talking, man. I deserve the shot. I broke the record, I worked my butt off, defended it multiple times, more than anyone in (heavyweight) UFC. There are guys who have never even defended the belt and got a rematch.”