LowKickMMA.com
Home UFC News Stipe Miocic: I Know I Have What It Takes To Beat Cain... 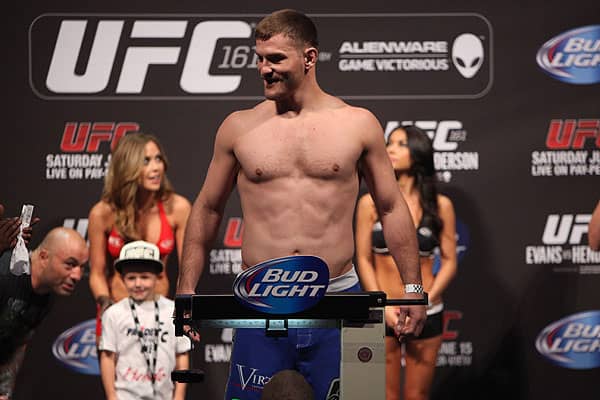 In a heavyweight division that is starving for new, young contenders, No. 4-ranked Stipe Miocic stands out as a possible title contender in the near future. He recently made a huge statement, absolutely dismantling veteran Mark Hunt and setting the record for most strikes landed in a fight in the main event of UFC Fight Night 65 earlier this month.

Prior to this, Miocic squared off with former champion Junior Dos Santos last December in a back and forth bloody five-round slug fest. Although he came up short, the Croatian proved that he had the cardio to go five rounds and the skill to hang with the division’s elite.

Now back in the win column, Miocic is looking for a title shot. The belt will finally be defended next month at UFC 188 when heavyweight king Cain Velasquez makes his highly-anticipated and long-awaited return to meet interim champion Fabricio Werdum. Miocic is looking to face the winner, and he believes he has the skills to beat either man:

“They’re both great fighters, but I know I have what it takes to be beat them,” he told MMAjunkie Radio.

Many are picking Velasquez to unify the belts in Mexico, and many also believe that Miocic may be the only man in the division that can match the champion’s insane cardio and pace. Having fought in main events in his last two bouts, Miocic is becoming used to five-round fights and he claims that the longer he goes in a fight, the better he gets:

“The longer I go in a fight, the better it is because I’m used to it,” Miocic said.

With the division lacking contenders, Miocic may very well be next in line for a title shot depending on the outcome of UFC 188. But can anyone really beat the baddest man on the planet, Velasquez, including Werdum and Mioicic?