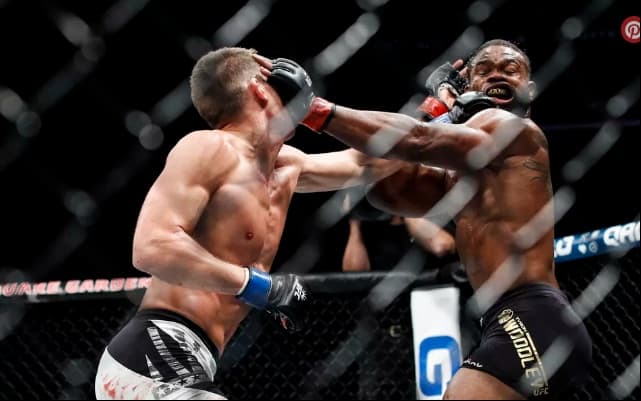 Reigning UFC welterweight champion Tyron Woodley faced a stiff test at Nov. 12’s UFC 205 when he met top contender Stephen Thompson, as the two went toe-to-toe in a five round war. The result, however, was a draw and Woodley retained his title, although a winner wasn’t technically declared.

Because of the result, UFC President Dana White was quick to say that an immediate rematch would likely take place, and according to “Wonderboy”, that rematch could take place in either February or March:

“So from what we understand, it is going to happen (the rematch),” Thompson told BJPenn.com “We are just not really sure when it is going to be in February, or if it will take place in March. Of course I have some healing up to do. I have some lacerations on nose and my face and I’m a little bruised up. I banged up my feet a little bit. But other than that, I am healing up good and ready to get back in the gym and start training again. So yea, from what we understand the rematch is going to happen. We just are not yet sure when or where. But I talked to my management company and they have been in talks with the UFC and everybody is happy with it man.”

Despite the fight being tremendously close, Thompson feels as if he has a lot of improvements to make, and he plans to make these adjustments the second time around:

“You know as soon as me and my coaches got back from New York we watched the video and looked at the fight and saw a lot of things that we could have done better. So we are going to improve on that man and we (myself and Woodley) will be doing it again probably in February or March.”

While he wasn’t necessarily pleased with the way the first fight ended, “Wonderboy” seemed happy with the experience he had fighting at the UFC’s debut at the famed Madison Square Garden in New York City:

“Man you know it was definitely a dream come true. To be able to fight in Madison Square Garden, one of the most prestigious venues in the world where so many legendary performers and athletes have performed, it was just amazing to be a part of that. Not only that, but it was really cool to be able to share the octagon with my brother in law Chris Weidman, which was also a big reason why I wanted to be a part of the card. Of course it did not turn out very well for the both of us, but we will definitely be better fighters when we step out there next time. But yea, it was just awesome man. Just to be able to fight for the title as well and fight one of the best guys in the welterweight division and go five 5-minute rounds was special. Of course it went to a draw and didn’t turn out the way I wanted it to, but it was very special regardless.”

How do you expect the rematch to play out?