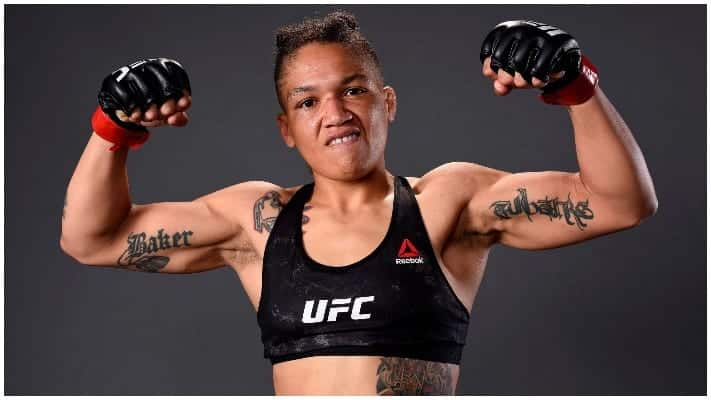 The internet has been sent on a whirl after a video of Eubanks hitting Ruiz surfaced on Twitter.

This would later be followed by pictures of Ruiz bruised up from the beating.

Late last week, Ruiz cried out for help to get out of the situation and exposed her former partner. She is believed to have accessed Eubanks’ Twitter account and released the following statement:

“This is Sijara Eubanks beating on her ex-girlfriend @lilly__ru that she mentions on her IG… she beat her for years now and she is bullying her and keeping all her belongings.”

During this time, Ruiz released video evidence filmed from her phone of an aggressive Eubanks striking her repeatedly, muttering insults and growling at her.

“Sarj” quickly deleted her Twitter after having her ex taking action.

Eubanks would later issue a statement on the domestic violence accusations, attempting to turn the tables by providing her side of the story.

“For the last 5 years I have been in an abusive relationship.” stated Eubanks on Instagram. “I have never said anything before because of my appearance and career, no one ever believed me. No one ever believed that someone like me could be a victim. So for years, I suffered emotion verbal and sometimes physical abuse at the hands of my now ex partner. I suffered in silence and often still managed a smile in public and still a decent professional career despite the trauma I faced at home.”

“As many of you know I have a daughter with this person and she is the sole reason I stayed as long as I did. Sure enough, the abuse slowly started to turn to my daughter and that’s when I had enough. Earlier this year I ended the relationship with this person and requested a custody arrangement. I knew my story would be hard to believe, but God is amazing and sent me an attorney who is fighting diligently for me and my daughter. I can’t get into the details because the legalities are still playing out. However, I am confident in the protection of our Lord Jesus Christ over me my daughter and my family and I am confident in our judicial system.”

“The truth will prevail and I will have my daughter back with me soon.” Eubanks added. “She’s what matters to me most. I can deal with defamation and lies later, for now all I think about, all I work for everyday is the health and safety of my daughter. Mama will not stop fighting for you baby!! Thank you all for your continued love and support.”

Not everybody believed the story, especially with the footage provided by Ruiz of the professional fighter hitting her in an outburst of rage. This wasn’t the only evidence of the alleged violence taking place at their residence however.

Lou, a family member to Lilly Ruiz released photos of his beaten and bruised mother-in-law on his Twitter.

Destiny, Ruiz’s daughter, gave her testimony on the situation at hand:

“My mom has been on and off with Sarj for years. My mom tried to leave plenty of times but Sarj always asked her to come back and that ‘she’ll get better.’ She never has. Abuse has been going on for years but my mom never said anything to the public because the cops never handled the abuse in favor of my mom.”

“My mom is a great mom, she’s in college and a full time mom to my baby sister and me.”

The UFC has not yet made a comment on Eubank’s current situation and it is uncertain at this time whether it will affect the Bantamweight contender’s future inside the Octagon, despite making waves outside of the cage.