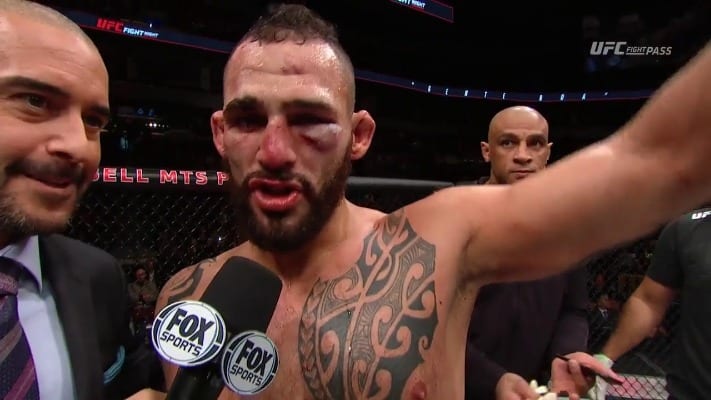 Santiago Ponzinibbio is looking to get back in the swing of things.

The UFC welterweight contender was last in action in November 2018 when he knocked out Neil Magny in the UFC’s first-ever show in Argentina. His absence since has been due to a number of factors, mainly injuries.

However, he is looking to become active in 2020 as he hopes to fight three times. That includes a welterweight title shot:

“I want to come back as fast as possible and fight for the belt,” Ponzinibbio told MMA Fighting. “My idea for 2020 is to fight at least three times, including a title fight. That’s my plan for 2020, brother.”

Ponzinibbio was scheduled to face Robbie Lawler at UFC 245 in December. However, he had to pull out due to a staph infection.

He has been offered fights since, but can’t accept any until he receives clearance from his doctor.

“Bacterias are a bit complicated, it really affected my immune system,” Ponzinibbio explained. “It’s not like a knee injury that needs surgery and then you know how long the recovery will take.

“This bacteria stuff, it depends a lot. It might last longer in one person. It’s a whole world I didn’t really know. It’s complex.”

Ponzinibbio’s Next Opponent Depends On Availability

When the Argentine is ready to fight, he isn’t sure who he could face next. Ideally, he would love to fight the champion considering that he’s on a seven-fight winning streak.

But given the current state of the division with all the fights that are currently booked, he is simply looking for someone that is available and will get him closer to a title shot:

“If I could choose, I’d fight the champion tomorrow, (Kamaru) Usman, or a top-5, but there are no options in the top-5,” Ponzinibbio said. “Tyron (Woodley) will fight (Leon) Edwards in March, so a fight (against the winner) wouldn’t happen until June or July. (Colby) Covington just broke his jaw and can’t fight.

“(Jorge) Masvidal is seeking other fights, taking about the belt or Conor (McGregor). Demian (Maia) already has a fight. Michael Chiesa is an option, he just fought and won, and did a good fight with (Rafael) dos Anjos. And there’s Lawler. It’s a matter of availability, too.”

Who do you think Ponzinibbio should fight in his return?