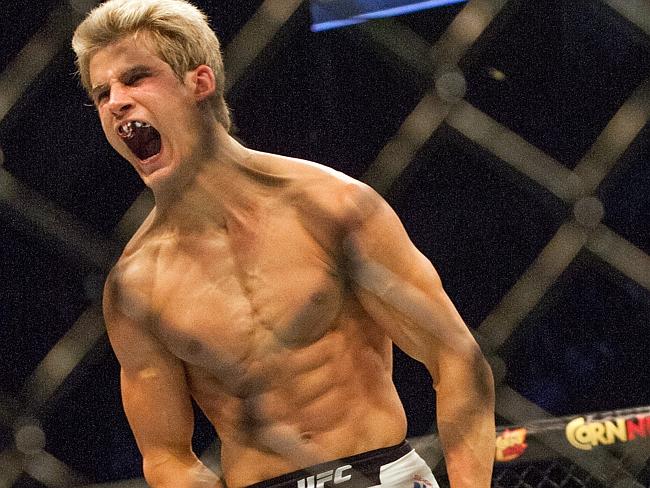 19-year old MMA prospect Sage Northcutt has been receiving a lot of high praises since his UFC 192 debut, but perhaps the most flattering is the comparisons to former welterweight champion Georges St-Pierre. A bright future seems to be on the cards for ‘Super’ Sage if he heads down the right path, as the promotion is fully aware of.

Northcutt’s next opponent Cody Pfister shows us that the UFC plans on moulding Northcutt slowly through the ranks, albeit at the cost of some confused fans and Kevin Lee. Having dropped in on St-Pierre’s Tristar gym this week, it sounds as though Northcutt has made an impression on coach and MMA guru Firas Zahabi. Check out what GSP’s trainer told Ariel Helwani during the most recent instalment of The MMA Hour:

“I was trying to talk to him, this was when he was in Legacy,” Zahabi said. “I saw his fights in Legacy, I really liked the kid. I’m always looking for that type of fighter. He has good distance and footwork and karate and traditional stuff. So I looked up, and I couldn’t find his dad on Facebook. I don’t know if has a Facebook, but I wasn’t able to. And then I got a call from a friend who knows them, and he said hey, we can connect you guys. And we got connected. We tried training for a week together, and we both enjoyed it, so we’re going to be working together from now on.”

So Zahabi is just as high on Northcutt as the UFC, his reasoning behind it is pretty sound though. Having spent just a week with ‘Super’ Sage, St-Pierre’s coach says the young talent reminds him of his ex-champion student:

“I think he reminds me a lot of Georges,” he said. “Georges is that type of guy — positive, good attitude, eager to train, always happy to go to practice. He’s always positive. I love it. That is the first step in being successful, having a good attitude.”

And it turns out everybody thought he’d be a great fit with Tristar, a lot of people were thinking the same thing. And it is. That’s the kind of fighter we like to look for — good, polite, kind, good attitude, hard working. And it’s working well.”

Sage Northcutt rolled in to the UFC on a big hype train, and it just keeps gathering momentum. A win over Pfister at UFC Fight Night 80 will spell big things for Northcutt, that’s for sure, but how far up will the UFC allow him to jump in terms of competition?

When harbouring young talent, it remains important to test them against fighters with similar abilities at some point, otherwise when the inevitable title shot comes around they might have a shock when trying to bridge the talent gap.