LowKickMMA.com
Home MMA News Ryan Bader Will Be Surprised If Rashad Evans Shows Up At UFC... 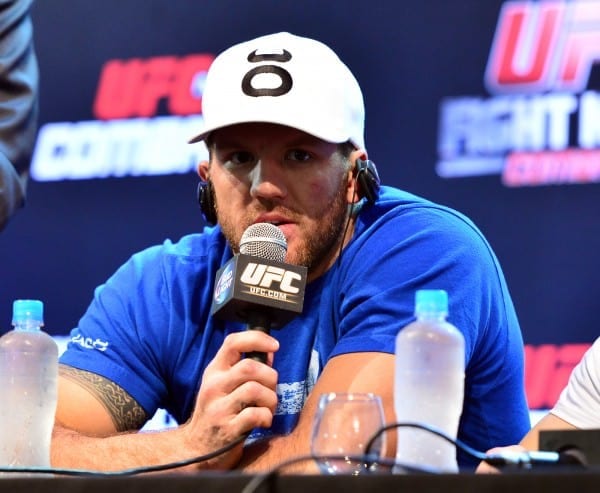 With his four-fight UFC win streak, his trash talk battles with current champion Daniel Cormier, and even his UFC 187 post-fight press conference confrontation with “DC”, many expected Ryan Bader to get the next crack at UFC gold, but of course we now know that the title shot went to Alexander Gustafsson.

However, Bader has been given the opportunity to take on top-ranked former champion “Suga” Rashad Evans at UFC 192 in what will likely be a title eliminator.

Bader seems to have gotten close to a title shot numerous times, but always seems to crumble at that point, making his fight with Evans super important. Recently speaking with Submission Radio, the former Arizona State wrestler seems ultra-confident.

Bader bashed Evans, saying that “Suga” looks like Cormier, and should worry about getting his weight on point. Bader also claimed that he wants it more than Evans:

“… if you see pictures of Rashad recently he looks like [Daniel Cormier]. So he’s gotta worry about himself in camp. [He’s] gotta worry about getting down to weight first…. I just believe we’re at different times in our careers. I want it, I’m this close to having my goal, getting a title shot, winning that belt. He’s been there, done that, and he’s at the tail end of his career, maybe looking for a couple more pay checks before he officially retires and does his analyst work with DC and all that. So I just feel like we’re in totally different times. I want it more, I’m more hungry.

Evans has been out for quite some time now dealing with multiple knee injuries, and “Darth” said that he’ll actually be surprised if Evans even shows up on fight night:

“Honestly, I’m surprised if he shows up. ‘Cause your body, if you’re not training for two years your body isn’t used to that, the rigors of a training camp and what you have to put it through to be in peak physical condition. Yeah you can skate by and do just enough and show up to the fight pretty much unprepared but you made it. So we’ll see how that happens. Two ACL surgeries in a row, it’s no joke, especially at his age. So that, coupled with the whole deal of ring rust, and like I said, we’re at two different points right now.”

Continuing on, Bader stated that he feels as if he’s been overlooked. However, he doesn’t mind being the underdog, and he plans on going out there and proving to everyone that no one deserves the title shot more than he does:

“I love it when people overlook me, underestimate me…. I love to surprise him and everybody else, all the fans, the UFC and … earn that shot and have there be no doubt in anybody’s mind that I’m next in line…. I go out there and look impressive, there’s nobody else that deserves it [the next title shot]. So definitely that’s something I would do.”

Cormier and Gustafsson will also do battle at UFC 192, and although Bader recalls his beef with “DC”, he doesn’t care who wins, he just wants to fight for the title. “Darth” also predicted a finish over Evans:

“And we don’t know who’s winning that Cormier and Gustafsson fight — that’s why they’re fighting, too. So everybody’s been talking, asking me like it’s a foregone conclusion that Cormier is going to run through Gustafsson and hopefully I can get my shot. It doesn’t matter. Yeah I had my little beef with Cormier and I wanna fight him, but at the end of the day my goal is the belt. So I’m happy to fight whoever wins that fight after us at UFC 192…. I look to go out there and finish him and earn my shot. So I’m gonna call a finish. I don’t know when and I don’t know how, but I’m gonna make it happen.”

Bader may have a point with Evans long layoff and his injuries, but one would have to believe that “Suga” wouldn’t be returning unless he was healthy, and a healthy Evans is one of the best in the world.

Is it Bader’s time to shine, or has he awoken a sleeping giant in the former champion?