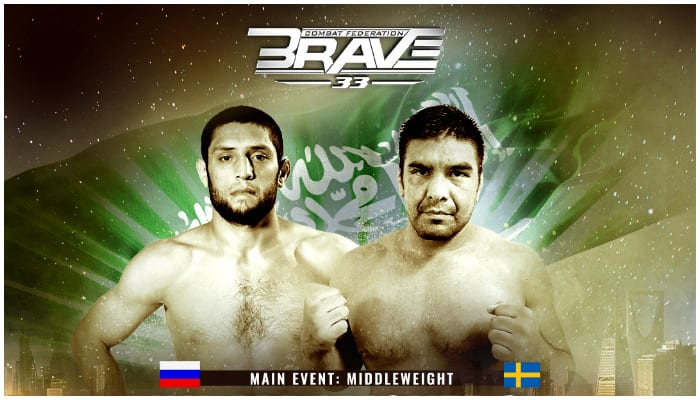 BRAVE CF’s final show of 2019, BRAVE 33, has officially been handed its main event. Russia’s Ikram Aliskerov will square off against Sweden’s Diego Gonzalez in a middleweight clash on Friday, 27 December. The event is set to take place inside the Prince Abdullah Al Faisal Stadium in Jeddah, Saudi Arabia.

Aliskerov made his promotional debut in 2017 at BRAVE 6. The powerful Russian quickly earned a reputation as one to watch after racking up five-straight wins under the BRAVE banner. However, Aliskerov’s winning streak came to a shuddering halt after he was brutally knocked out by Sweden’s Khamzat Chimaev when the pair meet in a welterweight contest at BRAVE 23.

After taking time off to regroup, the 27 year-old Aliskerov has decided to return to the division that has brought him the most success.

Last Saturday, at BRAVE 32 BRAVE crowned its inaugural middleweight champion after Brazil’s Daniel Souza captured the title in South Africa. The race is now on to see who can stake their claim for a shot at BRAVE’s newly crowned middleweight king. Both Aliskerov and Gonzalez will see this fight as a the perfect opportunity to put themselves forward as a future title contender.

This fight will be Gonzalez’s BRAVE debut. The 35 year-old is an MMA veteran who has spent years competing on the European circuit. The Swede trains out of AllStars Training Center, rubbing shoulder alongside such talents as Alexander Gustafsson and Jimi Manuwa.

Gonzalez’s main strength in his grappling; in this regard, he is similar to Aliskerov. However, Aliskerov will carry a striking advantage into this bout, with thirty-eight percent of his wins coming via KO as opposed to just five percent for Gonzalez.

Aliskerov will come into this contest keen to remind everyone that despite his loss to Chimaev he is still one of the promotions top middleweights.