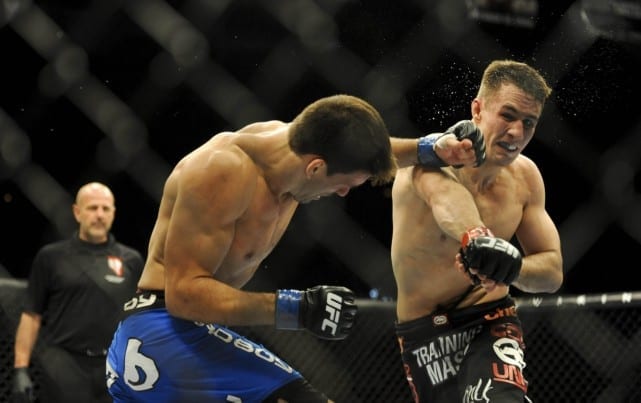 On perhaps the most successful streak of MMA career, top-ranked UFC welterweight Rory MacDonald recently received some bad news when he found out that he would no longer receive the title shot that had been promised to him in his native Montreal after Robbie Lawler took the belt from Johny Hendricks in a closely fought affair at UFC 181.

Long thought to be the heir apparent to teammate and friend Georges St. Pierre’s throne, “The Red King” was disappointed, but he quickly moved on to focus on “lighting up” his next opponent. That opponent not surprisingly turned out to be No. 5-ranked Hector Lombard, whom MacDonald will reportedly square off with at April’s UFC 186 from Montreal.

The calm and calculating MacDonald appeared on today’s (Mon., January 12, 2014) edition of The MMA Hour to state that while he has agreed to face Lombard, the bout is indeed not official as of yet:

“ I agreed to it; that’s all I’ve heard. But I haven’t got contract or anything like that yet, so. I agreed to fighting Hector, for sure.”

Yet it is still expected to take place, and MacDonald is excite about the high-profile match. At the end of the day, he didn’t want to wait around, so he took the best opponent that made sense:

“The Red King” believes that although Lombard didn’t exactly look his best during his recent unanimous decision win over Josh Burkman at UFC 182, he’s still an elite opponent:

“It obviously wasn’t his best performance, but I don’t think people should expect every time, someone’s going to be at their best every single time they fight. I have a lot of respect for Hector, and I’m going to be training very hard for him and taking him very seriously because he is a serious threat to the division and to me. Obviously his fight didn’t go the way he wanted it, but that’s how it goes sometimes. He is a dangerous fighter though.”

MacDonald moved on to discuss how he reacted to the disappointing news about his promised title shot:

“Obviously disappointed; I was a little bit heartbroken, but it’s okay. Even when I first heard the news that I was promised I was going to get the title shot, I was skeptical. You know, you can’t always believe what you hear. Things change so often in this sport you’d be a fool if you believed everything that came out. I’m not surprised that it happened, but I was pretty sad about it, a little bit.”

MacDonald told Ariel Helwani that he didn’t think his title shot was in danger due to Hendricks’ performance. He believed that Lawler won convincingly and it was clear he would be squaring off with “Ruthless” next, but the UFC saw it differently:

“Honestly I didn’t. I thought Robbie won the fight pretty clearly in my eyes. I didn’t see why they’d want a third fight at all. I figured they would definitely want me to fight Robbie after that fight. So it didn’t work out, didn’t work out like I thought it would.”

The former “Ares” said that while he lobbied to find out about the reasoning behind the peculiar decision, his efforts proved futile:

“Well, yeah, obviously I did, but nothing worked. I was curious about everything. It was kind of just like, ‘Well, you’re not getting it; that’s it.’ You know, it’s over.”

When asked if he stopped training for awhile or dwelled on the unfortunate news, MacDonald said he only shifted his mindset to his next fight, making him hungry to inflict pain on an upcoming opponent:

“Nope. You have to just change your mindset. I’m just hungry for the next guy. Yeah, I don’t know, I just want to hurt someone.”

MacDonald doesn’t agree with some of the UFC’s booking decisions, and he isn’t about to trust any speculation about his next perceived title shot. He’s only going to focus on what he can control, and that’s defeating top-level opponents in the Octagon:

“No, they haven’t said anything, and I wouldn’t believe them anyway if they did. So who cares? I’m going to go out there and keep fighting people. That’s it.”