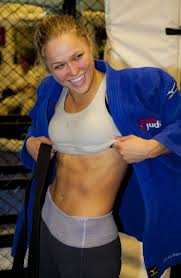 Bantamweight champion Ronda Rousey is accustomed to doing battle with other women in the Octagon. However, Rousey has another fight on her hands these days and it’s not in the cage, but rather on its periphery. As it turns out, “Rowdy” has an ongoing beef with “Octagon Girl” and micro shorts wearing beauty, Arianny Celeste.

In way of review, the beef started when the champ made a snide remark about Celeste in a 2012 Maxim interview. During the Q & A with the magazine, Rousey was asked about the Maxim “Hot 100” and whether or not there were any women on the list who – in the champ’s opinion and due to her competitive nature – outranked her on it, but didn’t deserve to.

To the question, Rousey replied as follows:

“It would have been really funny if I’d beaten [UFC Octagon Girl] Arianny Celeste, because that would be like a triathlete coming along and beating the runners in a marathon. Like, “Ha-ha, it’s your job to show your t**ies; I do that better than you!” Maybe next year; she’s only getting older, and I’m reaching my prime.”

With that the beef was started. However, the feud didn’t really go anywhere until last month when Celeste finally commented on the subject during an interview on MMAJunkie Radio. By way of a reply, Celeste stated that she thought Rousey was a bad role model for women.

“I don’t really like the way she carries herself, I don’t think she’s a good role model for women. I think that women should empower each other and give each other a little pat on the back.

I’ve personally been talked about by her, and I don’t even know her. I’ve met her twice. She said a couple things in her Maxim interview. A lot of people pointed it out to me, but I didn’t really acknowledge it.

She’s paving the way for women’s MMA, and I’ve made being a UFC Octagon Girl into a career. She should definitely recognize that and be nice.”

Yesterday, while at a UFC 171 pre-fight press scrum, Rousey was asked about Celeste’s MMAJunkie comments and the champ, with her usual candor, fired back at the Octagon card carrier and in doing so, took a swipe at Celeste’s intelligence.

“Those comments from the Maxim thing were from 12 months ago. Does it take her a year to come up with a comeback? They made grammatical sense, which is good for her.”

As to why either would bother with the other is anyone’s guess.

Rousey is a huge star and travels in world far beyond that of Arianny Celeste. As such, fans might scratch their head as to why Celeste would even show up on the champ’s radar screen. She is, after all, mere stage dressing to Rousey’s craft.

As to Celeste having anything to say about “Rowdy” she shouldn’t waste her time. It’s a fight that she can’t win. Rousey is simply too much of everything for her to take on.