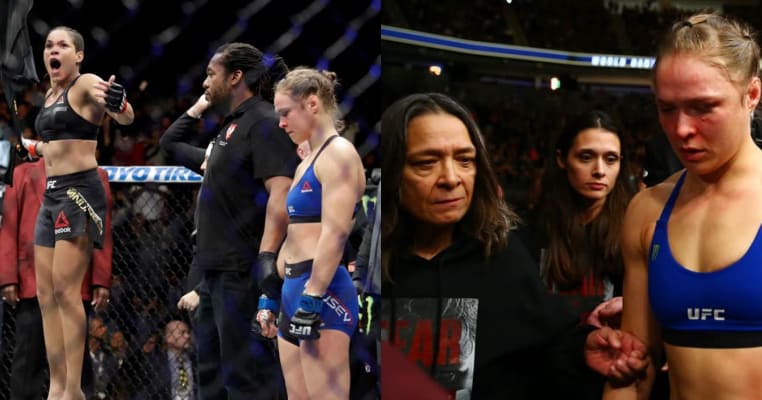 Former UFC women’s bantamweight champion Ronda Rousey likely saw her last career fight at UFC 207. Coming back after more than a year away took guts, let alone when you consider the rampant champion Amanda Nunes was Rousey’s return bout. Keeping the fight standing, Nunes made quick work of ‘Rowdy,’ winning in just 48 seconds by TKO. When all is said and done, retirement is highly probable at this stage, although nothing has been confirmed yet.

Such a crushing defeat is hard enough, but Rousey again will face the backlash of the internet. Although she’s probably more prepared this time, it’s well documented that she feels the media ‘turned on her’ after UFC 193. Speaking after last night’s main event, Rousey’s Mom Ann Maria De Mars released the following statement to her blog:

I have this to say about my daughter, Ronda

Like every mother and daughter on the face of the earth, Ronda and I don’t always see eye to eye. However, there is one situation where I am pretty certain.

All of those who have criticized Ronda for taking a loss so to heart, for not just ‘shrugging it off’ don’t understand that what made Ronda so successful is that she cares DEEPLY about winning to an extent that I don’t believe the average person can wrap his/her head around.

Caring deeply about something and working your hardest to achieve it doesn’t mean you make the right decisions 100% of the time. Wouldn’t it be a nicer world if it did?

Those of you who want to criticize Ronda, I just want to point out a few things. First of all, I know her better than you and she is a smart, kind, talented, generous, hard-working person.

Second, I’d like to list some of her accomplishments, and note that she isn’t yet 30 years old:

That’s just a partial list, but let me suggest that someone who has been world level athlete in two sports, written a best seller, acted in movies and made millions of dollars, all before the age of 30 has a pretty darn good track record. On top of that, Ronda has been part of the USADA drug testing since she was 16 years old, never failed a drug test,  always paid her taxes, never been arrested, never been to rehab, has zero divorces, zero DUIs and zero children. While you might think that is to be expected, look how many celebrities (heck, look how many of your neighbors) can say that.

I am very proud of my daughter.

As my other wonderful daughter, Maria, told her:

“We love you just as much 10 minutes after every fight as we did in the 10 minutes before.”