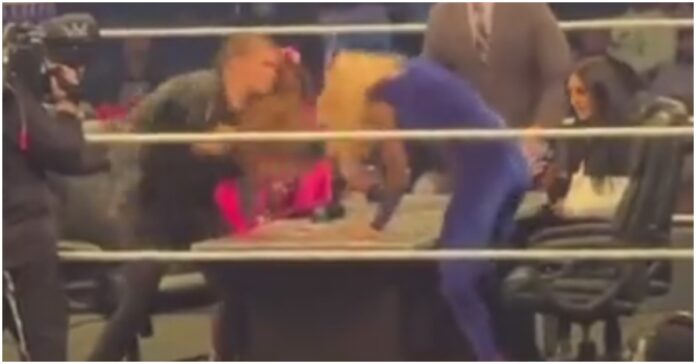 The WWE’s latest SmackDown episode has been recorded ahead of time and a video has gone viral between Ronda Rousey and Charlotte Flair botching up their staged altercation on the show.

The fan footage shows what appears to be a typical contract signing for the ‘WWE Elimination Chamber’ match between Rousey, Naomi, Flair and Deville.

The botch between the two entertainers shows, Ronda Rousey attempting to slam WWE Women’s Champion’s head onto the tabletop. To put it nicely, it doesn’t really go to plan.

it is most likely the editors working for the production will edit the mistake out, when the show finally airs on Friday, ahead of the WWE’s Elimination Chamber PPV on Saturday 19th February 2022.

Rousey has just returned to the WWE since signing a full-time contract in 2018, after making her shock return at the productions Royal Rumble PPV in January.

Some believe ‘Rowdy’, has signed a new deal with the WWE, however, it is rumoured that she is still on her original three-year deal, as it was frozen in her hiatus away from the company,

* The winner will receive a WrestleMania 38 title match for the WWE Raw Women’s Title.

Does Ronda Rousey regain her title at WWE Elimination Chamber?