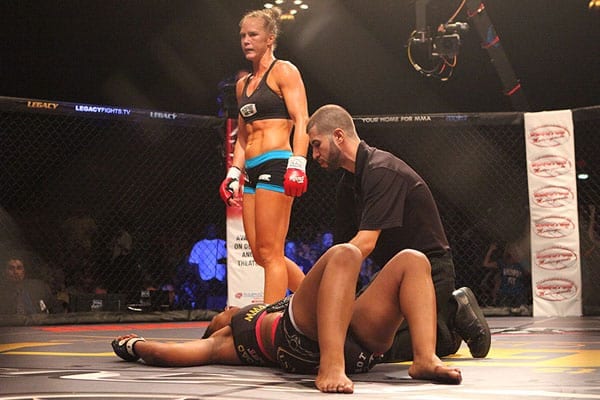 Rousey’s last three victories have come quicker than an instant pack of noodles in the microwave, making her the most dominant athlete in sports right now. According to a report on UFC.com, ‘Rowdy’ feels that Holm presents the biggest challenge of her illustrious career to date:

“She’s definitely my biggest challenge to date, so I’m super excited about it,”

“I prepare for a five-round war every time I get in there,” she said. “”No one’s easy until after you beat them, and with Holly Holm, she’s the type that is ready to go 12 boxing rounds. She’s not the average chick that I fight. She’s the best striker I’ve ever fought, and striking is something I learned much later in my career. So I don’t ever expect fights to be easy and fast. No one knows exactly how the fights are going to go, and that’s why everybody buys them.”

Predictions before Bethe Correia’s attempt at the title in Brazil were pretty spot on across the board; Rousey would crush and ‘Pitbull’ would crumble. The question now is does Holly Holm have anything more to offer?

“January 2 I’ll be fighting Holly Holm, who’s the most decorated striker we have in all of mixed martial arts; Not the women’s division, not the bantamweight division. [Holm]’s a 19-time boxing champion Holly Holm was The Ring magazine pound-for-pound Fighter of the Year, and definitely my biggest challenge to date.”

It’s a given that ‘The Preacher’s Daughter’ has ridiculous chops in the striking department, and could clearly knock out nearly anyone with her new-found love for head kicks in MMA, but that doesn’t mean she is anywhere near the level of the uber-elite UFC women’s bantamweight queen.

Is this another ‘top’ contender preparing to taste dust in Nevada, or does Holly Holm represent the next champion in the wake of Ronda Rousey?