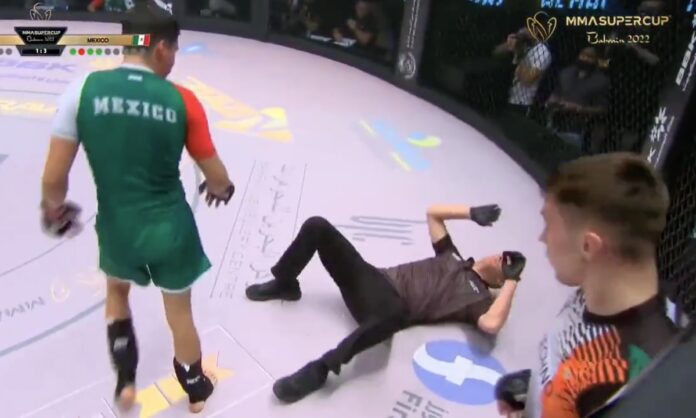 A buzzer-beating rolling thunder kick landed just before the close of the round during a match at the MMA SuperCup in Bahrain – with a Team Mexico representative landing the strike, however, on referee, Scott Manhardt – momentarily dropping the official.

Taking on Team Ireland in their pivotal semi final bracket, Team Mexico – who entered the inaugural tournament on just a week’s notice, eventually bowed out at the semi final stage.

The inaugural 2022 MMA SuperCup takes place in Manama, Bahrain in association with IMMAF

However, footage of one of their outings at the event went viral across social media – with referee, Manhardt suffering a rather surprising knockdown at the close of the round, courtesy of an innovative rolling thunder strike from Team Mexico.

Poking fun at the knockdown, Team Ireland team manager, Liam-Og Griffin questioned Safe MMA and IMMAF (International Mixed Martial Arts Federation) if Manhardt would be issued a 45-day no-contact suspension off the back of the knockdown at the MMA SuperCup.

“I wonder if @SafeMMAUK and @IMMAFed will issue a 45 day suspension for @ScottManhardt? (laughing face emoji). @marcgoddard_uk You gotta add head movement into the referee training.”

Eventually progressing to the finale, Team Ireland – which is headed up by the aforenoted, Griffin and head coach, Team Ryano leader, Andy Ryan, will feature on Saturday against Team Bahrain – after the hosts landed a semi final bracket success against Team Kazakhstan later this evening.

The inaugural 2022 MMA Supercup, which takes place in Manama, Bahrain – kicked off on Wednesday this week as part of the BRAVE CF International Combat Week, consisting of eight teams from different regions and nations.

The eventual tournament victor between Team Ireland and Team Bahrain will net a grand prize of $100,000 – with the funds expected to be used to help improve and develop the sport and infrastructure in the winning nation.

Second place runners up will net a further $75,000 – while both the aforenoted, Team Mexico, and Team Kazakhstan will compete in the best-third placed playoff to score a $50,000 cash prize to complete the inaugural MMA SuperCup.