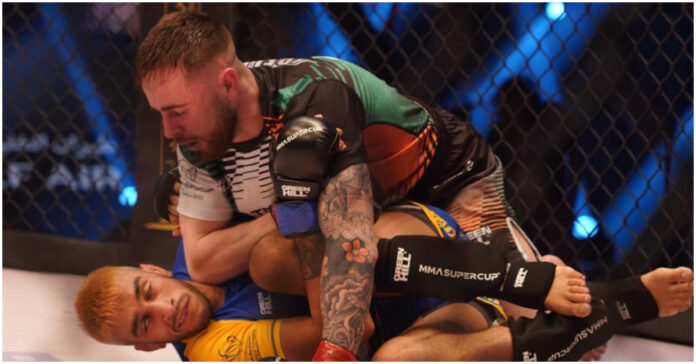 The inaugural MMA Super Cup kicked off today with eight amateur teams competing in a knockout tournament for the right to claim the trophy as well as US$100,000 in prize money. The tournament is taking place as part of BRAVE International Fight Week and is being held inside the Khalifa Sports City Arena in Isa Town, Bahrain.

Teams compete in a best of nine series and require five wins to advance to the next round. Bouts consist of three, three-minute rounds, with an extra round in the event of a draw.

The opening day saw Ireland taking on Oceania, Mexico facing off against the Arab Champions, Kazakhstan vs. Balkan Champions, and Bahrain vs. Tajikistan. Oceania and Mexico were last-minute replacements for Ukraine and Russia, but you would not have known that from the performances both sides produced.

The Oceanian team, made up of Australian and New Zealand fighters, went head to head with their Irish counterparts as they traded wins. Each side sat at four apiece heading into the final bout, a 120kg contest between Ireland’s Gustavo Lopez and Oceania’s Larry Adnan.

Adnan started strong and soon had Lopez in all sorts of trouble, as the Irish fighter found himself stuck on the mat and receiving a barrage of blows from Adnan. A stoppage looked to be on the cards when in the final ten seconds of the bout, Lopez took advantage of a mistake from Adnan and secured a kneebar which forced Adnan to tap out.

Lopez’s victory will now see Ireland take on Mexico in the semi-finals, with the Central American nation making short work of the Arab Champions. The Mexican team won the first five fights in a row and will be confident they have what it takes to make it to the final.

Team Kazakhstan demonstrated its superiority over the Balkan Champions with a 5-0 clean sweep on the other side of the bracket. They will now meet Bahrain in a massive clash between two of the top amateur nations in the world, with Bahrain and Kazakhstan ranked two and three, respectively.

Bahrain had a tough first outing against Tajikistan. Still, a team that includes such names as world pound for pound No.1 Ramazan Gitinov will always be a challenging assignment for any opposition, and Bahrain ended up taking the matchup 7-2.

You can follow all the semi-final action at immaf.tv.