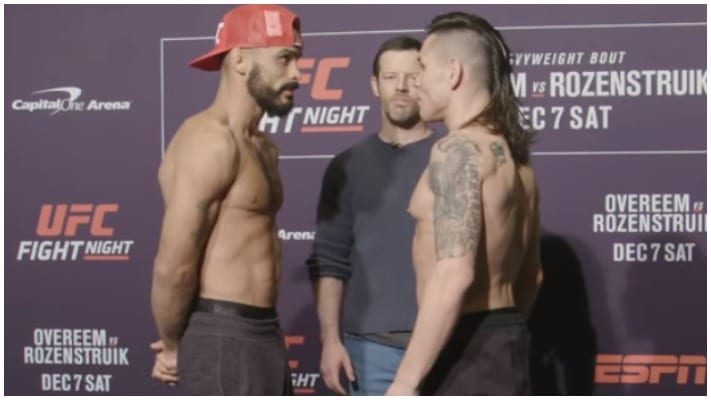 Opening up the UFC DC main card is a bantamweight bout between Rob Font and Ricky Simon.

Round 1: Font kicks things off with a big takedown. Simon gets up and clinches him against the fence. They separate and start unloading on each other. Simon goes for a takedown but it’s stuffed easily. Simon connects with a leg kick. A flurry sees Simon hurt Font and take him down soon after. Font gets up but receives a pair of knees before he’s taken down again. Font gets up and they separate. Font lands some strikes of his own now. Font attempts a spinning elbow but slips and Simon takes him down. They get up again.

Round 2: Simon is backed up and sees his takedown attempt stuffed. Font catches a leg kick from Font. Font catches Simon with a big hook. Font unleashes another brief flurry. Simon shoots soon after but Font gets back to his feet. Font lands another big shot and is clearly having more success in this round. Simon takes Font down soon after and is able to keep him down longer than usual but Font gets up eventually.

Round 3: Font starts with a number of jabs. Font stuffs a takedown attempt. Simon hurts Font with a body shot. Simon takes him down with a big takedown and has side control. Font does well to get up. Font lands a big strike but Simon doesn’t seem affected. Font is dominating the striking with good head movement and some solid strikes.