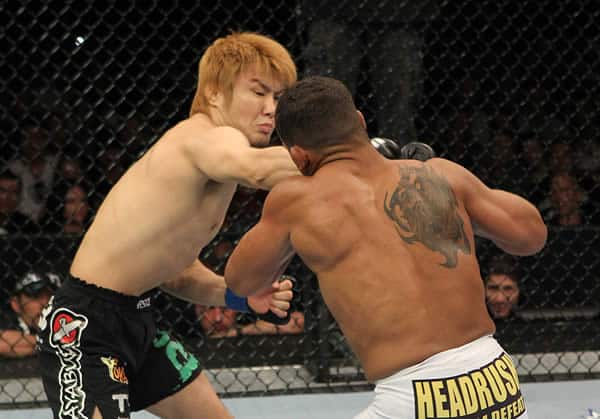 According to a report from Combate, the UFC has cut Takanori Gomi as well as four Brazilian fighters from its roster.

Martins, 35, has suffered back-to-back losses to the likes of Leonardo Santos and Kajan Johnson, who knocked out Martins at UFC 215 this past September. Overall, Martins went 4-3 inside of the Octagon.

Dias, 33, is riding a three fight losing streak that includes defeats at the hands of Cub Swanson, Andre Fili and Jared Gordon. Dias went just 3-5 throughout his UFC tenure.

Da Silva, 28, started his UFC career out strong, scoring back-to-back victories over Jonathon Wilson and Joachim Christensen, with both victories coming by way of stoppage. Since then, however, he’s lost four-straight bouts including two consecutive stoppage defeats.

Felipe, on the other hand, had yet to make his Octagon debut before the promotion decided to part ways with him. He was scheduled to take on Christian Colombo at UFC Sao Paulo last month, but he was flagged by USADA (United States Anti-Doping Agency) for a potential anti-doping violation and subsequently suspended for two years.

In addition to these four Braziliam fighters, the legendary Gomi was also released from the UFC. The Japanese veteran is riding a five-fight losing streak.