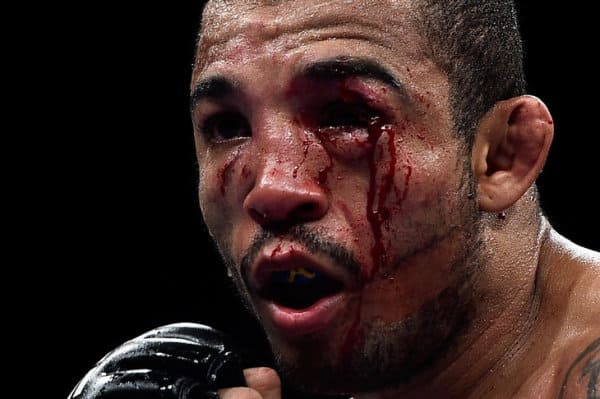 Some rather unsettling news has emerged in reference to UFC featherweight champion Jose Aldo and his recent NSAC (Nevada State Athletic Commission) random drug test. You’ll remember that ‘Scarface’ and his camp called the cops when the Commission’s random dope testers came calling, later stating that the whole fiasco was simply a misunderstanding. Aldo’s rib injury and subsequent removal from his UFC 189 date with Conor McGregor was basically the icing on the cake of a bad year so far for the champ.

So, to the meat on the bone, after claiming to have called the authorities to bust the alleged illegal alien that showed up asking for Aldo’s urine sample, it looks like the agency that was approached to do the testing, ‘Drug Free Sport’, has a rather conflicting version of events, as told during a recent statement issued by Chris Guinty of DFS:

Well, that’s a turn up for the books. After blasting Conor McGregor for his ‘weasel’ comments, it looks as though the long time featherweight champion and his Nova Unaio coach Andre Pederneiras may have some answering to do on the controversial subject in hand. If the tester did indeed have a valid visa, this may well have been a ploy to delay the urine sample being handed over. If so, it worked, as Aldo had a full 24 hours before having to eventually donate his pee.

In a world that has been marred by drug busts in the past year (and more), the last piece of news we need to hear is about an all-time great like Aldo joining Anderson Silva on the list of steroid cheats. Although his Brazilian countryman may have a strong case in rebuttal, is the current 145-pound bosses drug test bungle and sudden injury removal a crafty cover of some sort?

These are all of course speculative points from both sides of the coin, but something tells me this story is not over just yet. Stay tuned to LowKickMMA for more news on the Aldo-drug test/injury stories!