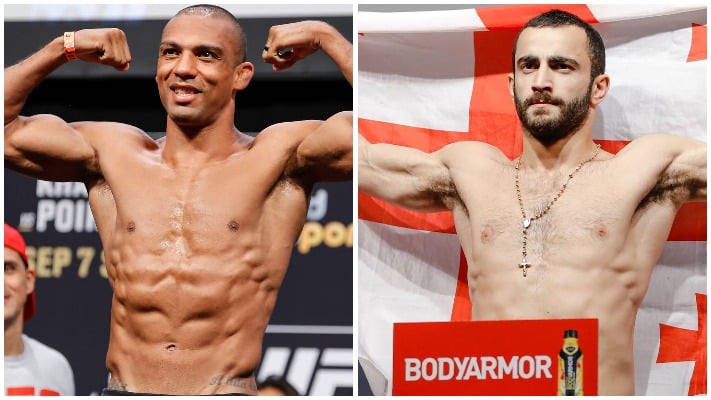 A fun featherweight fight is set as Edson Barboza is reportedly booked to face off against Giga Chikadze on August 28.

Brett Okamoto of ESPN took to social media to reveal the match-up is expected to headline next month, he wrote.

“Fun one here … Edson Barboza (@EdsonBarbozaJR) vs. Giga Chikadze (@giga_chikadze) will headline UFC Fight Night on Aug. 28, per sources. Glad to see these two get some main event shine. Well deserved. Not to mention, a banger of a fight.”

Barbosa looked sensational last time out as he sensationally stopped Shane Burgos at UFC 262 on May 15. The Brazilian currently holds two wins from three fights at featherweight and can count himself unlucky to have been on the wrong side of a split decision in his divisional debut which came against Dan Ige.

Chikadze is one of the brightest prospects in the 145lb division. In 2020, he picked up four victories inside the Octagon to set himself up for a bumper 2021. Earlier this year, Chikadze picked up the biggest win of his career when he quickly stopped Cub Swanson at UFC Vegas 25. Ever since the Georgian fighter has been calling out even bigger names and it appears he’s finally landed one.

Who do you think will win on August 28? Edson Barboza or Giga Chikadze?