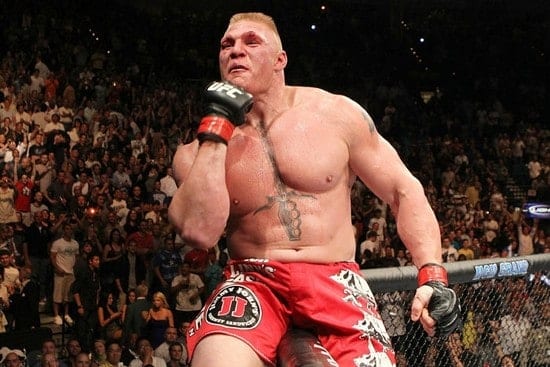 Recently there’s been a lot of speculation that former UFC heavyweight champion Brock Lesnar will be returning to MMA, and the rumors haven’t all been about him fighting in the Octagon.

Bellator President Scott Coker stated he wanted to bring the popular superstar into their fray, and although there haven’t been any real negotiations, he remains adamant that his company will be at the forefront of the bidding.

However, Coker and Viacom (Bellator’s parent company) may not have that chance if a report from Dave Meltzer of F4W Online is true. Apparently Lesnar, who is currently the WWE champion, is heading back to the UFC when his contract is up after the company’s flagship show, Wrestlemania on March 29, 2015:

“The Lesnar people always keep things quiet, but within the company, the belief is that he’s going back to UFC, and his showing up lighter to TV last week confirmed that to people who thought it. If it wasn’t for Punk, this would be a big deal, but with Punk, it’s a much bigger deal because the last thing WWE wants is this perception that UFC has just grabbed two of the company’s biggest stars. Lesnar is back on the 12/29 Raw in Washington, DC.”

Although UFC President Dana White has teased bringing Lesnar back into the fold on multiple occasions in 2014, this finding is worth noting because the UFC just another high-profile former WWE champ in Phillip “CM Punk” Brooks, who will make his MMA debut in the Octagon later on in 2015.

The UFC’s brand of MMA and the WWE’s “sports entertainment” are obviously completely different things, yet they have always been viewed as competitors for some reason. It’s most likely true that WWE owner Vince McMahon would be none too happy about having two of his most high-profile stars fighting for the UFC, but that could become a reality before the end of next year.

There’s going to be a lavish bidding war for Lesnar’s services once his contract with the WWE is up, as he was one of the highest drawing MMA stars to ever step into a cage during his meteoric rise to prominence from 2008-2011.

Lesnar’s UFC run was cut short by an unfortunate bout with diverticulitis, and he’s reportedly fully healthy now. The Meltzer report teased that he showed up at a WWE taping lighter in an effort to cut weight for MMA.

That could just be wishful thinking, but it wouldn’t also be a surprise to see Lesnar return to the shallow UFC heavyweight division. Bellator remains an option, too.

With the rumors continuing to pile up about Lesnar, will his proposed MMA return ever amount to anything?