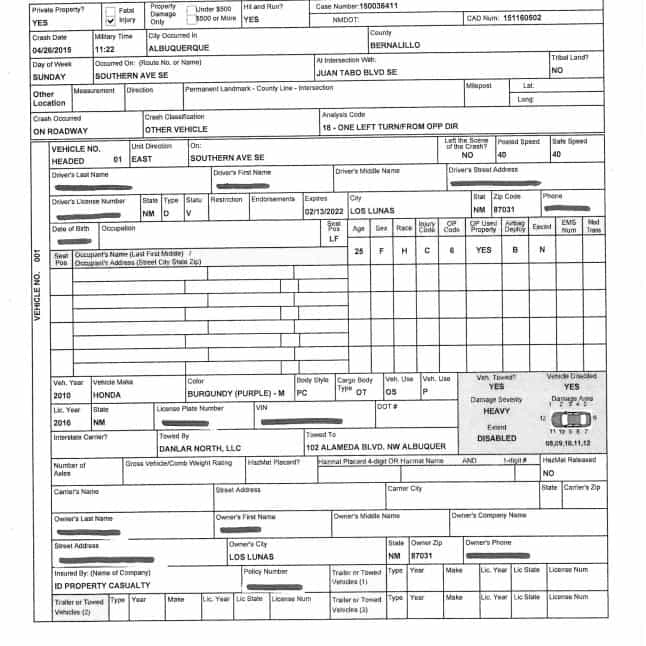 It’s been another crazy couple of days in the life of UFC light-heavyweight champion Jon Jones. In case you missed it, news broke last night that Jones was involved in a hit and run in New Mexico. The victim, apparently a pregnant woman, was left injured at the scene and later transported to hospital where she remains in stable condition.

The ABQ Police dept. is still searching for “Bones”, who is yet to make contact, as are his lawyers. Even worse, Jones is said to have been witnessed grabbing bundles of cash before fleeing his vehicle, which was later found to have marijuana and pipes inside.

Check out the statement on the official police report, courtesy of MMAMania.com:

On 04/26/2015, OFC. J. Brionez and I were dispatched to a hit and run traffic accident, at the intersection of Juan Tabo and Southern. Caller stated the driver of a silver SUV ran from the accident. OFC. Brionez and I arrived, with rescue arriving on scene shortly thereafter. The driver of both vehicles refused rescue. The driver of the Honda stated her husband will take her. Driver one stated she was heading East in lane 2, and was crossing through Juan Tabo on a green light, when driver 3 ran the light hitting her on the driver side. Driver 2 stated he was waiting at a red light facing North of Juan Tabo and Southern. Driver 2 stated when driver 1 was crossing on a green light, driver 3 turned into her from the southbound turn lane of Southern hitting her driver side. Witnesses and drivers from both vehicles stated driver of vehicle 3 got out and left running. Witnesses stated the driver of vehicle 3, exited after hitting the Honda and was identified as a black male, wearing a white button up shirt with dark pants, and ran onto a hill just east of the accident. Witnesses stated he slouched over and ran back to the vehicle grabbing a large handful of cash. Witnesses stated he shoved the cash into his pants and ran north jumping the fence in Terracita. I sent officers to attempt to locate the driver of vehicle 3. The officers who attempted to look for him were unsuccessful. Driver 1 was taken to Kaseman hospital due to being pregnant an feeling like she was going to pass out. OFC. Brionez and I conducted a search incident to tow on the Buick. OFC. Brionez found a marijuana pipe, with marijuana inside it and tagged it into the evidence. I located paperwork belonging to a Jonathan Jones, which had MMA information on it from the state of Nevada. I was able to locate a phone number for Jon Jones and placed several phone calls with no success. I left a message for Jon Jones to call dispatch, but never received one. The paperwork will be tagged into evidence. There was also Enterprise Rent-A-Car paperwork inside the vehicle, for the location of Lomas and Easterday. I made contact with an unidentified employee, who stated they were closed and not open until Monday. I was contacted by OFC . J. Sullivan, who informed me he was driving east on Southern and seen the accident, off duty. OFC. Sullivan stated he witnessed Jonathan Jones the MMA fighter exit the silver Buick and run up a dirt hill just east. OFC. Sullivan stated Jon Jones was wearing a white nice Polo shirt, with dark slacks or jeans. OFC. Sullivan stated he watched Jon Jones run back the Buick and lost sight of him at that point.

So the Jon Jones hit and run saga continues, and may be the worst smear on the illustrious champion’s CV so far. A failed drug test and one-day stint at rehab obviously didn’t serve as a big enough kick up the ass. The full official police report also confirms that the other vehicle had children in, so this could’ve been so much worse.

With all the negative media that Jones continues to bring the UFC, is it high time that they actually did something about it? Here is the face of their promotion, endangering children and innocent bystanders, running from the scene with drugs involved.

Although this is yet to be determined in a court of law, it’s obvious that this is a pretty condemning case thus far.