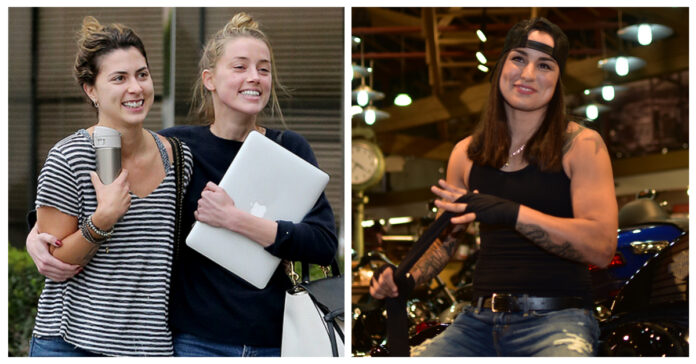 Pennington is coming off a dominant win over Aspen Ladd at UFC 273. The fight went the distance and ‘Rocky’ secured a unanimous decision win but has been out of action since due to a hand injury.

Recently, Johnny Depp-Amber Heard defamation trial has been massively popular in pop culture and the fact it’s being live-streamed adds fuel to the fire. During the course of the trial, the defense presented a video of one of her former best friend’s who’s named Raquel Pennington.

Not only does Heard’s former best friend share the same first and last name with the UFC veteran, but they both also have the same nickname, ‘Rocky’. This led to confusion amongst the fans who believed the fighter Raquel to be Heard’s ally. There were media reports suggesting her to be that person as well when she in fact was not.

In an interview with LowKick MMA, Raquel Pennington expanded on what it was like to face the brunt of angry fans due to being confused with Heard’s friend of the same name.

“Honestly, at this point, I’m so sick of hearing about it,” Pennington said. “Like, whenever it first started happening, it was just like, ‘what is going on?’ My social media blew up like crazy. It’s just crazy to me how it’s the year 2022 and we have so many resources available but the problem is, is media for one cannot report very well.”

Raquel Pennington shared her support for Depp and believed Heard and her team were not convincing.

“There’s been some media that mixed up some things and they keep saying former title challenger or MMA competitor, and that’s where it’s gotten the huge mix up in.” she said. “After everything kept dragging me into it and I kept hearing about it, I was like, ‘let’s watch some of this.’ So I watched some of the trial and I think that Amber, Raquel, all of them made themselves look absolutely ridiculous.

“That trial was just absolutely ridiculous. I was full force for Johnny on that one but at the end of the day I mean, it was extremely crazy to see like the messages that I was getting.”

‘Rocky’ revealed the spiteful messages she was receiving in regards to Heard, some of which baffled her due to their explicit nature.

“Wow, people are extremely passionate and they absolutely hate Amber Heard. They hate her but the level that they were going to within just the words they were saying. It amazes me how somebody can get on their computer and type out the things that they can to other individuals. It’s honestly pretty sad.

“I had to make the best of this situation. So, I had some fun with it and I was going to catch heat regardless and what not but it was crazy. Needless to say, I’m glad that’s over with and I hope I don’t hear it anymore.

“Yeah, that girl just took a good name and destroyed it. It was just crazy. It is amazing the names that people come up with to call you and the things that they say and stuff, I was just like wow.”

“People took the behind-the-scenes pictures of Tecia and I from like, my fight with Holly Holm at the arena. They started reporting that as like, me and my fiance. So she got dragged into it, was getting a lot of messages just saying really nasty things.

“Tecia, like, she pays attention to a lot more of that stuff so she was just getting really irritated with stuff but for a while, she was just like you know, ‘this is crazy’ and she was laughing at things and whatever. What are you going to do about it you know?”

Did you confuse Raquel Pennington with Amber Heard’s friend?