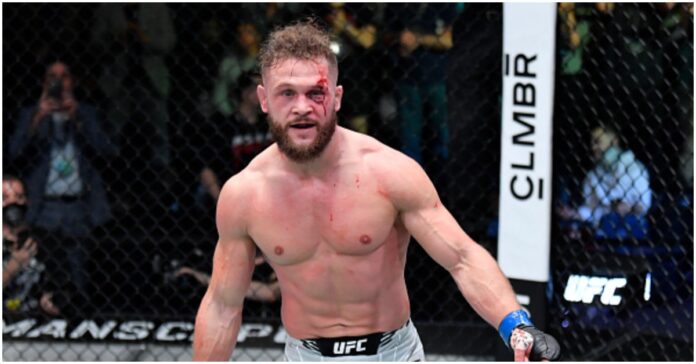 Big news today, as up-and-coming lightweight star Rafael Fiziev has been forced to pull out of his fight against Rafael Dos Anjos at UFC 272 due to the COVID-19 virus.

The fight was originally slated to main event UFC Vegas 48 but was pushed back because of VISA issues Fiziev had.

Now, it’s officially off, and the MMA world is buzzing to see who steps up to replace him.

The news was originally reported on Ariel Helwani’s The MMA Hour, and it’s sparked the interest of a ton of top names in the 155lbs division.

Rafael Fiziev Out, But Who Steps Up to Take his Spot?

Rafael Dos Anjos is a former champion and also holds one of the most star-studded resumes in the game. A win over him could change your career, and it seems like a well-known secret with all the fighters lining up to step in.

Chief among them would probably be Islam Makhachev. This young Dagestani killer just brutalized Bobby Green in the main event of UFC Vegas 49 but seems to realize another big win could be all he needs to solidify a title shot.

“170 ??? Let’s do it. We have unfinished business RDA @ufc @espnmma @bokamotoESPN @MMAjunkieJohn” Makhahev said on Twitter.

Not only has Makhachev wanted to step up, but names like Paul Felder and Renato Moicano have also voiced their willingness.

“I wonder if the course of the dragon still holds true with an immediate rematch? 174” Felder said. “How many days this time?” He added, referring to his and RDA’s last fight, which was also on very short notice.

Who do you think the UFC will choose to replace Rafael Fiziev? Leave your predictions down in the comments below!