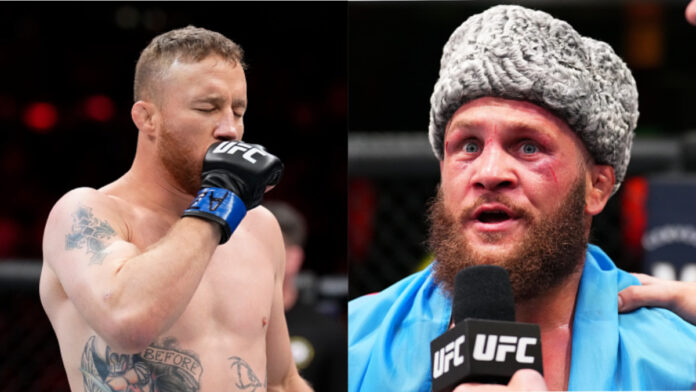 Rafael Fiziev has cemented his name amongst the lightweight elite with his finish over Rafael Dos Anjos at UFC Vegas 58, and he’s now setting his eyes on a Justin Gaethje fight.

There were a lot of questions regarding how the grappling defense of ‘Ataman’ would stand up against RDA’s relentless grappling, but for the most part: Fiziev answered them all. Defending 14 of 16 total takedown attempts by Dos Anjos, and limiting him to just a poor 12% takedown accuracy.

The striking was very close, but at the end of the day, the scorecards would never matter. As Fiziev would land a bullet of a left-hook that would seal the KO/TKO victory for him in the fifth round.

At the post-fight press conference, Fiziev opened up about his UFC future. Discussing the fight, the finish, and what would be next for him now after such an impressive performance over a UFC legend such as Rafael Dos Anjos.

“I want a fight with Gaethje,” Fiziev began (transcribed by MMA Weekly). “We need to know who is the best for you and for me. If you’re ready, if you’re no scared, if you don’t take s**t, let’s go.”

Justin Gaethje is 3-2 in his last five, currently coming off of a round one submission loss to the current lightweight champion, Charles Oliveira. At the moment, the Gaethje camp has stayed silent on the Fiziev call out. It’s not clear whether or not this is a fight that will appeal to ‘The Highlight’, but it undoubtedly would be an exciting battle.

Who do you want to see Justin Gaethje and Rafael Fiziev fight next?