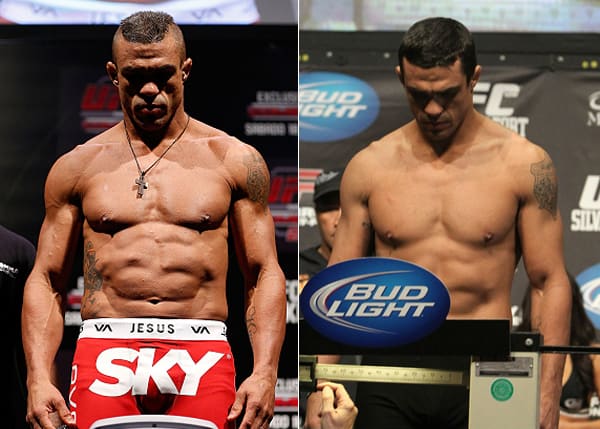 Vitor “The Phenom” Belfort happens to be one of the most controversial fighters in mixed martial arts (MMA) history due to a laundry list of failed drug tests, mainly due to his infamous use of the now-banned testosterone-replacement-therapy (TRT).

During the height of his TRT use, which was perfectly legal at the time, “The Phenom” looked like a bodybuilder and hit like a truck. He scored three-straight head kick knockouts throughout 2013 on his way to earning a middleweight title shot.

However, he then spent quite some time on the sidelines after the substance was banned. Belfort was forced to wean his body off of it and he came back looking like a much smaller depleted version of himself. The Brazilian was destroyed by current champion Chris Weidman last May and will now look to get back to his winning ways when he meets Dan Henderson for the third time in the main event of this Saturday’s (November 7, 2015) UFC Fight Night 77.

Henderson, who was a victim of one of Belfort’s 2013 head kicks, hasn’t been one to keep quiet about the troubled history of “The Phenom”. Recently speaking with MMAFighting, “Hendo” said that Belfort must’ve been using more than just TRT.

The former Olympian was also a user of TRT, but claims that unlike Belfort, his body didn’t go through a drastic change:

“By the looks of it, yeah, obviously he was doing more than just TRT. He was abusing something. Obviously, we won’t know for sure unless somebody comes out and says they know, but I have no idea. He’s also tested positive for steroids in the past, and since he’s tested for TRT and other things too. I think that if you look at the picture of both of us when we fought then, and a picture of both of us now, I mean, a picture says a lot. Obviously, he was doing a lot more than I was, my body hasn’t changed at all. I was barely doing any TRT, and I wasn’t abusing anything.”

“Hendo” clearly hasn’t forgot about his last meeting with Belfort. Will he be able to get his revenge this weekend?