Jessica Eye has really been gunning for a crack at UFC star Paige VanZant, but she’ll have to settle for a bout against Kalindra Faria at UFC St. Louis on January 14th instead.

VanZant and Eye have been scheduled to fight twice before, however, the fights never came to fruition. VanZant will be competing on January 14th as well, but it will reportedly be against Jessica Rose-Clark. During a recent appearance on The MMA Hour, VanZant offered an explanation as to why she isn’t competing against Eye (quotes via MMA Fighting):

“I know that originally me and her were supposed to fight and that I ended up getting hurt, then they tried to get that fight matched up again, but at that point the UFC had moved on and they were trying to get me on the Australia card,” VanZant said. “They asked me when Anderson Silva ended up not being on the Shanghai card, they asked if I would take a last-minute fight. They asked me ten days or maybe two weeks before the fight if I would take a short-notice fight in Shanghai, so this whole time I thought I was going to be jumping in for a short-notice fight because I got ready really quickly and after my back healed I had this itch to get back in the cage right away.”

Eye has her own version of events, however, claiming that VanZant called UFC President Dana White and asked to get out of the fight:

“Because Paige called Dana and asked to get out of the fight,” Eye said. “They were not gonna let her out of this fight and she – whatever bitch fit she threw, I signed that contract, I signed that one October 18 I think… I got the contract signed and returned it that day for that one. I have the other signed contract that we sent back for the other fight and for the other time. Listen, I’m not here saying that maybe two different things weren’t being said, but we all know that the UFC does not send contracts to people unless both parties agreed upon wanting the fight and said yes to everything.

“That went out and then it was like New York weekend (UFC 217) happened and all of a sudden she came home and realized, ‘Oh, wait a minute, Jessica is one of the best 125ers and she can kick my ass. So now I don’t want this fight, I would much rather go fight a girl that Bec (Rawlings) lost to,’ because she beat Bec. Which is fine. It’s totally fine but we’ve been trying to get myself a fight. I haven’t been in the cage, I’ve been begging for 125 and we revolved all of our decision making because Paige was being cooperative. And then one day I think I have a fight coming up, the next day I don’t. It’s not fair for her to do that.” 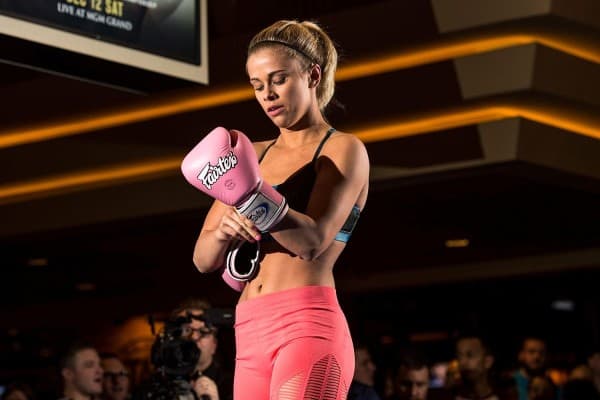 Whether or not VanZant did in fact call White to get out of the bout, Eye believes she “12 Gauge” would have still found a way out of their Octagon meeting regardless:

“She would have faked some kind of injury or found some other way to get out of that fight or whatever, who knows what would have happened?” Eye said. “It’s not the UFC’s fault, I think it’s bulls**t that she’s trying to act like it’s the UFC’s fault. It was her thing. She was the one who went back and said that she didn’t want the fight, out of nowhere. … In my world, like in most people’s world, if you make a fight, that fight should happen. You don’t get to just choose that, you don’t get to just be the dictator of that.”

“It’s not that I’m pissed off, it’s that if you’re going to tell – listen, I told a lie about my career once and it really screwed things up, I learned from it,” Eye continued. “It’s not fair that she gets to go and play this little innocent role that people are bullying her, that people are saying things that are untrue. I never said anything that was untrue. Paige reached out to me and texted me in July originally about the fight and said, ‘Let’s do this. Let’s kick off this division.’ And we agreed, because we’re fighters and we’re professionals and that’s what we do and then she gets injured. I even messaged her when she gets injured, saying sorry that she was hurt and doing the right thing.”