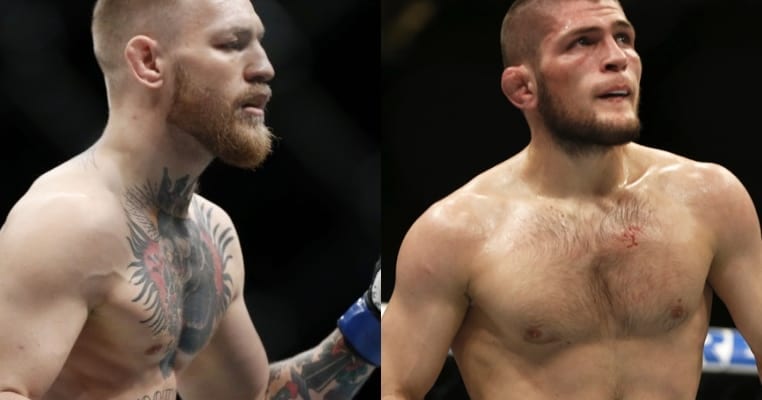 Undefeated UFC lightweight contender Khabib “The Eagle” Nurmagomedov scored a dominant submission victory over No. 6-ranked Michael Johnson at Nov. 12’s UFC 205, furthering his case for a title shot at 155-pound champ Conor McGregor, who won the title in the evening’s main event with a spectacular second round knockout over Eddie Alvarez.

Nurmagomedov quickly called out the Irishman after his win, but McGregor seemed less interested in the bout, and many feel as if “The Eagle” would be a bad match up for the “Notorious” one given the Russian’s decorated wrestling background.
In fact, longtime veteran Dan Henderson feels as if Nurmagomedov would ‘beat the piss’ out of McGregor:

“”I think that kid that fought last weekend, I have trouble with his name, Magomedov, the Russian kid, that’s at 155 — I think he would definitely give Conor a huge problem,” Henderson said Friday on The Adam Carolla Show, referring to undefeated lightweight contender Khabib Nurmagomedov.

“I think he definitely would take him down and beat the piss out of him.”

Then speaking on the brash and outspoken McGregor, Henderson said that he doesn’t ‘dislike’ the Irish knockout artist, although he admits it took some time to get ‘onboard’:

“I don’t dislike him,” Henderson said of McGregor. “I think it took me a while to kinda get onboard with him, just to see a little bit more well-roundedness. He’s always shown that he’s got good hands, good kicks, but to see him against a couple different wrestlers that had good hands, it took me awhile to get onboard with him. I think Eddie just did not fight a smart fight whatsoever. He didn’t use his wrestling whatsoever.”

“Hendo” most recently battled it out with middleweight champion Michael Bisping at October’s UFC 204, but ultimately came up short and retired in the aftermath.