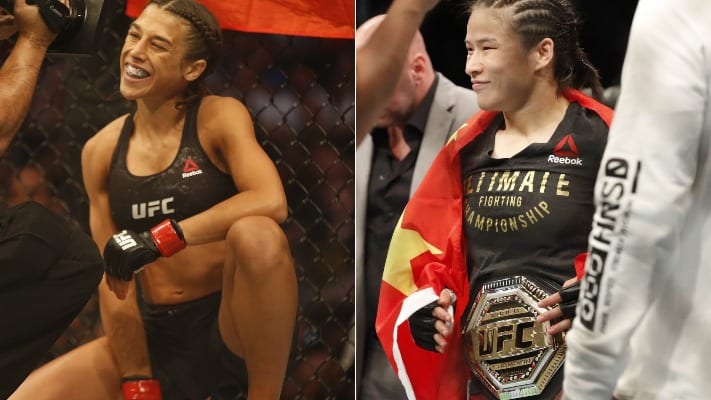 Weili Zhang is the new face of the UFC’s 115-pound division, and may already have her first title defense lined up. Ex-division queen, Joanna Jedrzejczyk, comes off a big win over Michelle Waterson in Tampa, Florida.

With the win, Jedrzejczyk has been promised a title shot next. Despite Zhang saying she has no interest in fighting Jedrzejczyk, the fight may be inevitable. Zhang captured the 115-pound crown by taking out former champion Jessica Andrade in the first round this past August.

Speaking to MMA Fighting recently, Andrade, who has felt first-hand what both Jedrzejczyk and Zhang are capable of, gave her prediction for how a fight between the pair would go down. Andrade said she doesn’t think Jedrzejczyk will be able to handle the power and pressure Zhang brings to the table.

“A fight with Joanna would be very interesting,” Andrade said. “Joanna is one of the best in the division, and she has evolved a lot, as we saw in her last fight. Weili Zhang is very strong, is really fast on the feet, so I it would be really interesting.

“It’s a hard one to predict who would win, but I’d bet on Weili Zhang. I think she would continue to reign, because of her strength. Even though she’s not the type of fighter that goes for takedowns and prefers to stay on the feet, she’s very strong and kicks really hard – something Joanna doesn’t handle that well.”

Jedrzejczyk is on a two-fight win streak at strawweight and presents an interesting stylistic matchup for the new champion. She’s easily the best striker Zhang would have ever shared the cage with, but Zhang presents a whole new meaning of power and pressure in the 115-pound weight division. A fight between the pair would surely be nothing short of exceptional.

What do you think about Jedrzejczyk’s chances against Zhang?