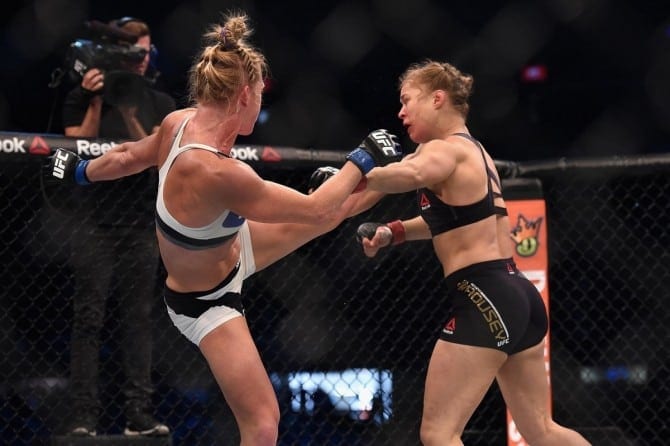 Ronda Rousey’s mixed martial arts (MMA) career is currently on a tremendous downward spiral, and it’s all thanks to Holly Holm.

The formerly undefeated 135-pound female champion once sat atop the mountain of MMA glory, before being knocked off with a thunderous head-kick from ‘The Preacher’s Daughter’ in the main event of UFC 193 in November of 2015. After a hiatus from the Octagon that lasted over a year Rousey returned to challenge current bantamweight champion Amanda Nunes to reclaim her throne, but was subsequently knocked out in just 48 seconds of the first round.

While Rousey’s Octagon future remains in a state of doubt, Holm is currently in preparation to challenge for the UFC’s inaugural female featherweight title against Germaine De Randamie in the main event of UFC 208 next month (Sat. February 11, 2017) from Brooklyn, New York.

Holm’s head-coach, Mike Winkeljohn, recently joined Submission Radio (quotes via MMA Fighting) ahead of his pupil’s historical bout, and shared his thought’s on ‘Rowdy’s’ downslide since the loss to Holm:

“She was just basically waiting for the end in essence once she couldn’t find a way to grab her. And she did the same thing she’s done before in the past, reaching out with her left arm and trying to corral. It was just a one-sided fight just like I said. I think she’s done.”

Given that Rousey has remained relatively quiet since her second consecutive loss, despite her brief statement following her bout with Nunes stating she needs time to reflect, do you believe we’ll ever see the former bantamweight queen compete in the UFC again?