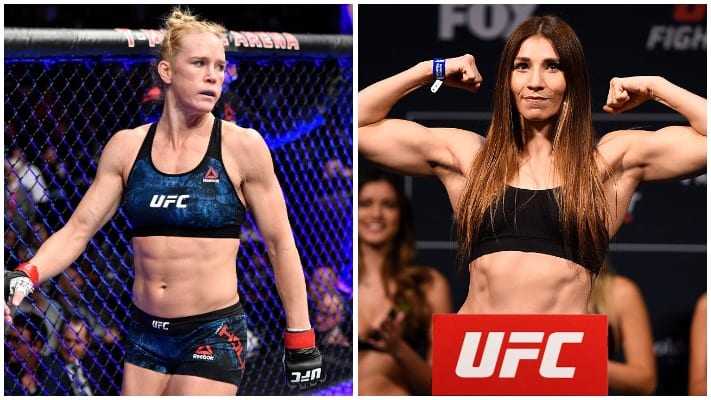 It turns out a positive COVID-19 test was the reason why the Irene Aldana vs. Holly Holm fight was postponed.

It was reported on Wednesday that the women’s bantamweight bout set to headline the UFC’s upcoming August 1 show was postponed for undisclosed reasons. The middleweight bout between Derek Brunson and Edmen Shahbahzyan would instead headline the card.

Now we know why.

Aldana revealed on social media she had tested positive for COVID-19 despite having a training camp in total isolation.

She is now recovering and feels much better as she looks forward to fighting Holm on a new date.

“I deeply thank the fans and all the media for their messages of support and the interest shown in the news of the postponement of my fight in 1st, August vs. Holly Holm,” Aldana wrote in a statement. “We are going through a very complicated world situation and my country is no exception: COVID-19.

“Despite the fact that we have made a camp in total isolation and with the health measures recommended by the authorities, unfortunately I had some symptoms and in the pertinent examinations it was positive. I am still recovering: the first days were complicated in terms of symptoms, but I am much better.

“… I deeply thank the UFC, its president Dana White, Mick Maynard and my opponent and her team for the understanding shown, we will be ready for the new date that the company assigns us within the next few months.””

Aldana is on a two-fight winning streak and has also won five of her last six outings. Holm, meanwhile, returned to the win column against Raquel Pennington after getting knocked out by Amanda Nunes in their title fight last summer.