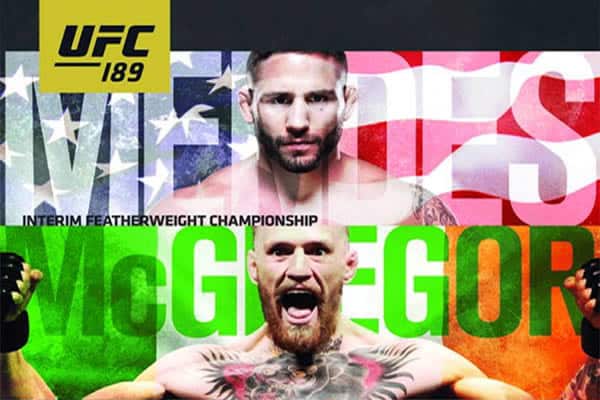 We are just days away from another big night of UFC PPV (pay-per-view) action from Las Vegas, as we usher in UFC 189 fight week with style. The skinny on the main event is the absence of the featherweight champion Jose Aldo, and the almost as awesome replacement booking of Chad Mendes vs. Conor McGregor for the interim crown. A short notice booking for the UFC, but it looks like it’s working out quite well. Mendes and McGregor have enough of a rivalry that it was simple to inject ‘Money’ in to the equation.

What we are left with is an interesting mix of styles, perhaps the ideal blend to test ‘The Notorious’ and his wrestling defense, although his huge reach and height advantage may stop the NCAA wrestler in his tracks. The Irish star is yet to share the octagon with a pedigree wrestler like ‘Money’, his five-fight winning streak has been somewhat weighed down in the forums by the need to face a grappler, and the outcome in Nevada should quash one side of the argument permanently.

Does the SBG (Straight Blast Gym) boxer have the wits to hang with an elite all-rounder like Mendes, or will the two-time title challenger from Team Alpha Male bring another belt home to Sacramento, Cali? Stable mate TJ Dillashaw upset the odds in defeating Renan Barao for the bantamweight crown, and Mendes is going to need a similar calibre performance if he wants to make a statement at UFC 189. Equally, McGregor has never faced a fighter as talented or highly ranked as ‘Money’ , so who’s it gonna be?