LowKickMMA.com
Home MMA News Poll: Who Will Be The First To Defeat Joanna Jedrzejczyk? 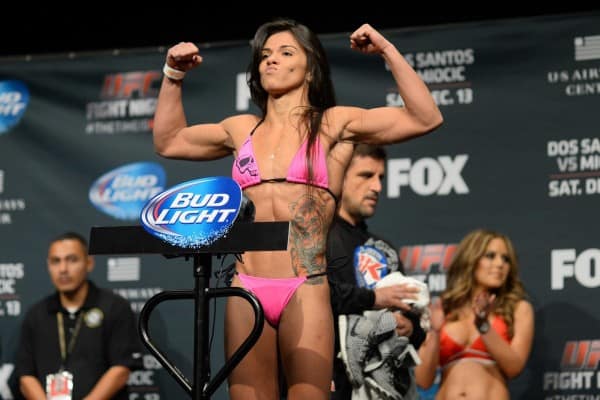 With the dust settled on UFC women’s strawweight titleholder Joanna Jedrzejczyk’s vicious domination (highlights here) of Jessica Penne in the main event of today’s (Sat., June 20, 2015) UFC Fight Night 69 from the O2 World in Berlin, Germany, the discussion will not only shift to whom ‘Joanna Champion’ will face in her next bout, but if any 115-pound woman on the face of the Earth will actually be able to beat her.

The most obvious candidate for that extremely tall task would have to be the winner of UFC 190’s anticipated potential title eliminator bout between Jedrzejczyk’s old foe Claudia Gadelha and the UFC-debuting former WSOF strawweight champ Jessica Aguilar.

The top-ranked Gadelha famously took Jedrzejczyk to the limit at UFC on FOX 13 in late 2014, with the bout going to the Polish Muay Thai champion in a split decision that many feel should have been awarded to Gadelha.

Both Gadelha and Aguilar are well-rounded, dangerous fighters who could present different problems for Jedrzejczyk if they were able to ground her, but that seems to be the problem for all of her recent opponents despite their accomplished mat credentials.

Of course there are also young, touted, up-and-coming prospects like the always-dangerous No. 4 Rose Namajunas, No. 7 Paige VanZant, and No. 8 Maryna Moroz, who recently shocked previously hyped Scottish contender Joanne Calderwood with an electrifying armbar at UFC Poland in April, calling out ‘Joanna Champion’ in the process.

Most would argue that those fighters need quite the amount of experience in the Octagon to contend with Jedrzejczyk, and they’d be right. But by the time their title shot rolls around if she has the belt, they may (or may not) have acquired the skills and experience necessary to dethrone the seemingly unstoppable champ.

With that said, who is your pick to defeat Jedrzejczyk?