LowKickMMA.com
Home Polls Poll: Who Is Your Pick To Win The UFC 188 Main Event? 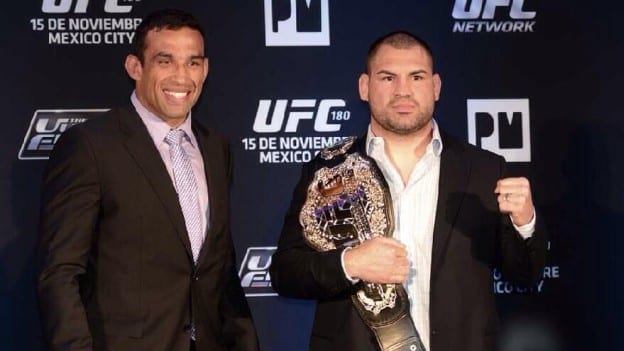 It’s UFC 188 fight week, and we wait eagerly for the heavyweight championship to go on the line this weekend (Saturday June 13th, 2015) in Mexico City, Mexico. Cain Velasquez has watched patiently from the sidelines, nursing numerous knocks and injuries, as Fabricio Werdum has torn to a five-fight win streak in the heavyweight division. ”Vai Cavalo’s’ efforts have culminated in a UFC 180 interim championship win over Mark Hunt, and he hopes to unify the belts against the dominant Mexican champion.

The heavyweight boss Velasquez has kept his court in order with savage beatings of Antonio Silva x 2, Junior Dos Santos x 2, Brock Lesnar and Antonio Rodrigo Nogueira. Will he be able to return from such a lengthy lay off and be as effective as he once was? The AKA (American Kickboxing Academy) staple has been training hard for this one, and the trash talk recently by his Brazilian foe seems to have gotten under the skin of the title holder.

Velasquez will be Velasquez at UFC 188, but is Werdum the next champion? A win over the dominant kingpin would put ‘Vai Cavalo’ in the P4P list surely, but can he do what so many people are doubting he can?

What’s your pick for the UFC 188 main event? Take a vote and leave your opinion.