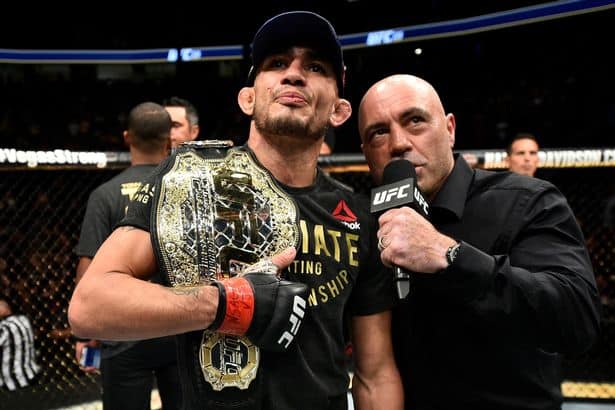 Everyone remotely associated with MMA is looking forward to the Tony Ferguson vs. Khabib Nurmagomedov main event at April 7’s UFC 223 from the Barclays Center in Brooklyn, New York – even if they don’t which version of the lightweight title will be on the line.

Of course Ferguson is the interim champion as Conor McGregor drags his feet in deciding or announcing his long-awaited comeback, but the very real possibility of “The Notorious” never coming back after his 0 million payday to box Floyd Mayweather last year has the UFC is the precarious position of having to potentially strip their biggest star of a title again.

Yet they won’t come out and say it, as Dana White danced around the question when asked at a UFC 220 media event last month, giving his predictable and tiresome ‘we’ll see what happens’ in response. The situation was only clouded when White said the winner of Ferguson vs. Khabib would ‘be the champion,’ but gave no indication of what they would decide for McGregor.

With speculation running wild that they will strip him of a second title, the recently released UFC 223 poster may be an indication of those plans. Based on a photo of the poster released last night, the UFC 223 main event will be for the ‘world lightweight championship’ – not interim – suggesting McGregor would be stripped by fight time. Check it out: