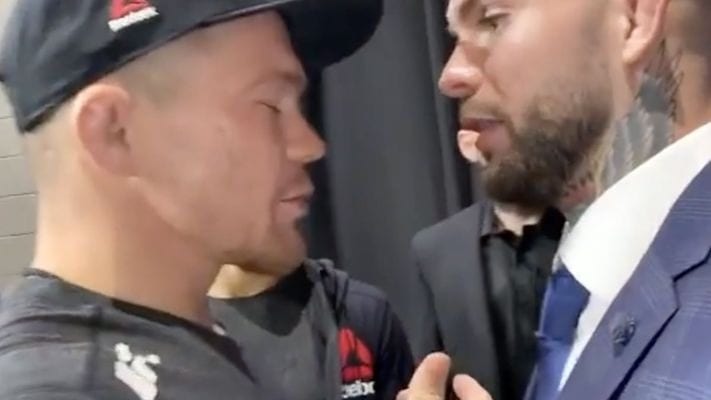 This past weekend (Sat. December 14, 2019), Petr Yan and Cody Garbrandt certainly laid down the groundwork for a potential fight down the road.

Following Yan’s win over Garbrandt’s longtime friend and mentor, Urijah Faber, who he knocked out in the third round, Garbrandt and Yan engaged in an intense back-and-forth backstage. Garbrandt, who s currently set to face Raphael Assuncao in Ohio next year, is now eying a fight with Yan with a potential win over his Brazilian counterpart.

Speaking to MMA Fighting, Yan opened up on what exactly went down between himself and Garbrandt backstage. It seems an exchange of comments on Instagram beforehand led to the disagreement.

“Nothing really happened,” Yan said. “Cody wrote, ‘Get this MFer,’ on Dana White’s Instagram page, I jokingly replied, ‘You are next, No Chin,’ and he tried to act tough and crossed the line by commenting that he will see me tomorrow and smack me like a little ho.

“You all saw what happened when he saw me face to face: he was hiding his hands behind his back, acting all emotional and didn’t back up his words proving that he is all talk. He is a puppy – he barks, but doesn’t bite.”

As for whether or not Garbrandt presents him any challenges that he finds concerning, Yan admits the Team Alpha Male product has good speed and power, but points out his chin isn’t great either.

“Maybe he has speed and power, but he can’t take a punch,” Yan said. “It would just be a matter of time before I can catch him and after that you will see another fall of the man with no chin. Now I understand that he talks big just to stay relevant. He is trying to attach his name to mine because I just won the fight and I’m on the rise.

“He needs to win a fight first before calling me out. To be honest, at this stage of my career, I’m not interested in this fight at all. I believe I deserve to fight for the title and will talk to UFC about that first.

“After that we can plan and see what fights will make sense. In the future it’s still possible, I would love to show you Russian boxing style.”

What do you think about a potential fight between Garbrandt and Yan? Who are you picking?